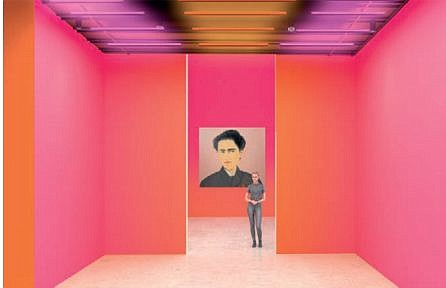 Glossy magazines and fashionistas both celebrate and occasionally revile the fashion collaboration, but fascination with this design practice continues. One of world’s premiere fashion houses will be putting together a Beverly Hills show based on its artist collaborations.

Some background. For more than a decade fashion brands, designers and artists have partnered for one-off collabs that occasionally capture the fashion world’s imagination. Remember the 2017 collaboration between fashion house Louis Vuitton and skate brand Supreme? People waited for hours in lines to purchase the collaboration’s sweatshirts and backpacks. Resalers peddled the collaboration’s items for the 10 times the original price, according to media reports.

Louis Vuitton will put some new collaborations on display this week. It will unveil June 28, the gallery show Louis Vuitton X – Louis Vuitton in Collaboration. It will be exhibited at 468 N. Rodeo Dr. in Beverly Hills, Calif. The space on the corner of Rodeo Drive and South Santa Monica Boulevard was sold for $245 million in December. LVMH, the parent company of Louis Vuitton, was reportedly behind the transaction.

The Louis Vuitton X show will exhibite more than 180 items from the fashion house’s archives , including monogram works reworked by fashion stars such as Karl Lagerfeld, Rei Kawakubo, artists such as Cindy Sherman, as well as celebrated architects such as Zaha Hadid and Frank Gehry.