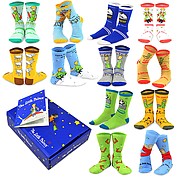 Ryu got his start in the sock industry when he worked for a Dominican Republic sock manufacturer, where he was the warehouse manager. He returned to his native South Korea before emigrating to the United States in 1995.

With his knowledge of the sock industry, he set up a Southern California company where he was the liaison between sock ventures in the United States and sock factories in China.

Then he branched out on his own with his La Puente enterprise.

Last year, to increase domestic production, he came up with the idea of making his own sock collections and selling them directly from his factory. To get that idea off the ground, he sent his staff to the Licensing Expo in Las Vegas to see what kinds of partnerships they could develop.

“We didn’t know too much about licensing and made some meetings,” said Kevin Ryu, a marketing assistant who is the company owner’s son. “We ended up working with a licensing agent.”

The result is that Soxnet this summer is introducing several licensed sock products for Love Is, Tarzanimals, The Little Prince, Emily the Strange, Zoltar, Puppy In My Pocket and Mary Blair, an artist who produced art and animation for The Walt Disney Company and worked on the “It’s a Small World” attraction at Disneyland.

About 50 percent of the company’s licensed socks are made on the company’s print machine at its La Puente headquarters, with all print socks made in the United States and licensed knit socks manufactured overseas.

The company has its own digital-printing machine made by Wuxi Design Digital Science & Technology for printing onto socks, said Jesenia Quijada, the company’s production manager. “The Wuxi machine will print on the sock as it is placed on a cylinder,” Quijada said, noting that it helps to deliver products faster.

For its large private-label orders, Soxnet still uses factories in China and South Korea as well as its own factory.

Soxnet also does personal orders for individuals or companies that want to have their own sock designs produced. Soxnet can either deliver a sock designed by an outside company or have the company work with an in-house Soxnet designer to fashion art for the socks. “We will give them a few options and design the socks for them,” said Gabriela Vega, the company’s marketing director.

In the United States, 75 percent of the socks found on store shelves are made in China while another 12 percent are produced in Central America. Pakistan is a big source of cotton socks.

There are very few sock manufacturers in California, but domestically there are Bamboosa Inc., an organic apparel and accessories company in Culver City, Calif., that manufactures three or four styles of basic socks on the East Coast; and U.S. Hosiery Inc., founded by Steve Won some 20 years ago in downtown Los Angeles, that imports and distributes all kinds of socks from overseas factories.

Won said that when he started his business, many of the socks he sold came from an Alabama factory. “All sock manufacturers disappeared from the United States 20 years ago,” he said. “They all moved to China.”

For Won, selling domestically made socks were too expensive. A pair of women’s novelty socks made in China can cost as little as 70 cents a pair.