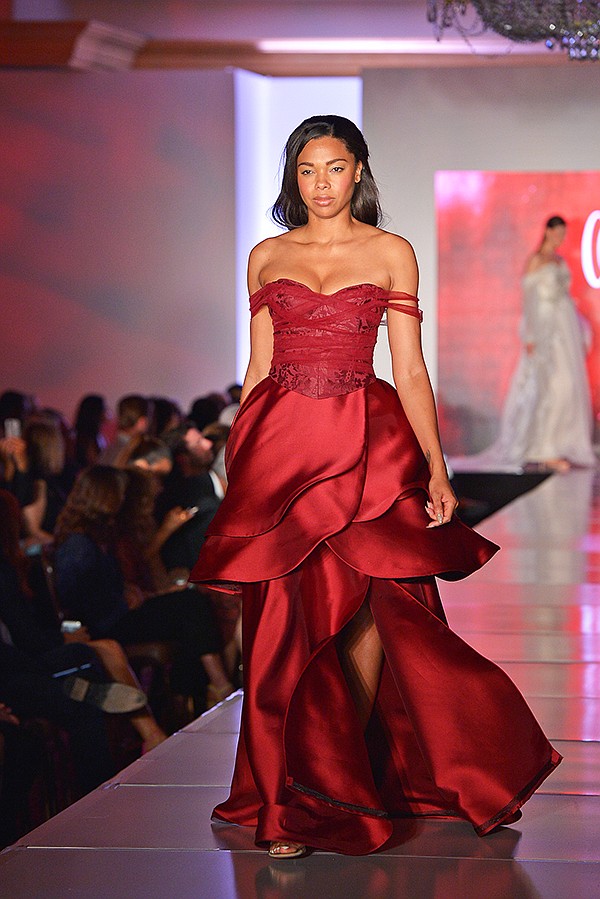 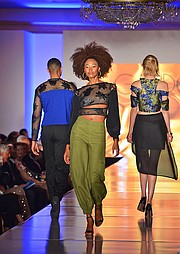 Anna Leiker, the chair of the Department of Fashion, said architecture was chosen as this year’s theme because designers from both fields of fashion and architecture have drawn from each other for inspiration. “Fashion designers assimilate visual principles from architecture, and architects borrow pleating, weaving and traditional tailored techniques for their styles.”

The event, held May 4 at the Millennium Biltmore Los Angeles in downtown, took on a high-fashion vibe when the university awarded New York fashion designers Mark Badgley and James Mischka its Lifetime Achievement Award.

The two are known for their modern interpretation of 1940s Hollywood glamour with their elegant gowns and sophisticated dresses constructed from luxury fabrics and using intricate details. Recently, the Badgley Mischka label opened a flagship store off the Sunset Strip in West Hollywood, Calif.

“Mark and James joined forces in 1988,” said Sue Vessella, the university’s dean of the School of Media, Culture and Design. “They have endured because they remained true to their own design aesthetic and were passionate about what they are creating.”

On hand to accept the award were the two designers, who spent the afternoon before the show with 40 fashion students, who peppered them with dozens of questions about working in fashion. “We were taken away with how excited, engaging and dynamic these students are,” Badgley said. “There is a tremendous amount of talent and excitement here.”

Then 13 creations by the couture designers were shown on the runway before the student fashion show took place.

For the student fashion show, six seniors and a number of sophomores and juniors filled the catwalk with a variety of styles and fashion interpretations ranging from swimwear and childrenswear to menswear and women’s styles.

For the senior collection, each student from the university, headquartered in Burbank, Calif., researched and selected the work of a specific architect whose design aesthetic was inspirational.

Amber Luke is a designer specializing in costuming. For her collection, she looked to art nouveau for her style guidance and presented six dragon costumes inspired by the architecture of Victor Horta.

Chelsea Batres took her inspiration from Antoni Gaudí, the famed Spanish architect from Barcelona, Spain, whose collages of broken tiles and intricate projects incorporated influences from nature. She tried to invoke a fun and youthful vibe in her designs.

Joseph Dasalla looked to the clean designs of architects Richard Neutra and Kengo Kuma for his menswear collection of suits and jackets he made for the elegantly dressed man. Geometric shapes accented the pockets and lapels of his jackets and sweaters.

Recycled fabrics made up the majority of Kayla Stiff’s avant-garde designs, which were inspired by Zaha Hadid’s architectural structures.

Also looking to Zaha Hadid for style influence was Ketorah Joy-Na Jones. She said the purpose of her brand was to stand out, which she did with a burgundy satin tulip-shaped gown and other rich designs.

Clothes that can be worn by anyone was the goal of Tina Stephens, who designed gender-neutral silhouettes that incorporated a number of jumpsuits. She drew her inspiration from streetwear styles and Japanese culture.

At the end of the show, Amber Luke was given the Most Innovative Collection Award, and Tina Stephens was presented the award for Professional Performance.