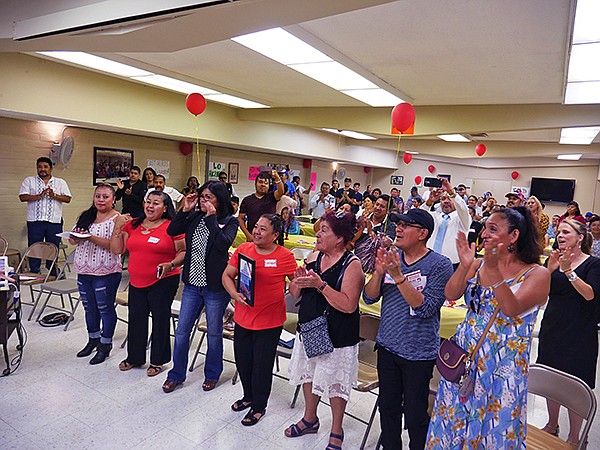 Some Los Angeles–area garment workers will finally be able to cash checks long denied to them.

It was estimated that more than 400 people are on this fund’s waitlist for compensation for unpaid wages, said Marissa Nuncio, executive director of the Garment Worker Center, headquartered in downtown Los Angeles’ Fashion District.

“The fund has always taken one to two years to pay, but in the past few years the wait has become increasingly longer to indefinite,” she said and forecasted that workers on the fund’s waitlist would be paid in a few months. The Garment Worker Center estimates there are 45,000 garment workers in Los Angeles, and the group contends that the employees are routinely underpaid. A UCLA Labor Center study released in 2015 found that Angelenos lose $26.2 million a week in unpaid wages.

Nuncio and some of her colleagues started a campaign in April to cut down the fund’s long waits by petitioning the California state government when it was putting together its 2019–2020 budget. When Gov. Gavin Newsom signed the budget in June, it included $7.3 million to eliminate the waitlist. An additional $9 million was transferred from another existing unpaid-wage fund.

The state government collects monies for funds to compensate a range of workers including agricultural laborers who were victims of wage theft. If workers do not claim payments, monies are placed in the state’s general fund. The legal-aid group Bet Tzedek, the UCLA Labor Center and the Western Center on Law & Poverty assisted on the budget request.

The Garment Restitution Fund was a payor of last resort for garment workers who proved that they were victims of wage theft. The fund was started in 1999 by a law authored by former assembly member, now Sacramento mayor, Darrell Steinberg. It has been supported by business-registration fees and renewals from garment manufacturers, but the demands on the fund quickly outpaced portions of the registration fees underwriting it.

The demand and supply on the fund’s finances left some garment workers remaining uncompensated for years. These workers would petition the fund after the Labor Commissioner’s Office ruled in their favor. However, many were unable to collect from the Labor Commissioner’s Office rulings, as some former employers declared bankruptcy or went out of business.

This year, the fund issue was brought to the attention of Mitchell, who serves as the chair of the standing committee on budget and fiscal review. In May, the Garment Worker Center organized a trip to Sacramento to give testimony on their conditions, and the workers spoke before several committees.

“We’re not afraid to fight, particularly on a righteous issue like this,” Mitchell told the crowd during the Aug. 31 event in Los Angeles. “You deserve to be paid for your hard work.”

Durazo told the crowd that she was inspired by garment workers who testified to get the waitlist funded. “This is what is missing in the capital—men and women showing their values and willing to fight and say that I’m not going to stop until I am respected as a human being,” she said in Spanish.

While the event was a celebration, with a DJ playing cumbia music and taquitos served, workers on the fund’s waitlist informed the crowd regarding the hardships they endured due to wage theft.

“I didn’t have enough money to pay rent,” Carmen Torres said in Spanish. “I had to go to a church to ask for food to survive.”

She brought her case to the Labor Commissioner's Office in 2015. When her former employers did not pay, she took her grievance to the Garment Restitution Fund. She estimates that she has $47,456 in unpaid wages coming to her.

Pedro Montiel said that he worked in abysmal conditions. “The owners would scream at us. The factories themselves were infested with rats and cockroaches. It was a disaster. I made a salary of $250 per week, working 50 to 60 hours per week,” he told the crowd in Spanish. “I couldn’t stand the abuse anymore. I went to the labor commission. We couldn’t get funds there. We went to the state fund. They said it would take five to 20 years to get compensated.”

With the $16.3 million funding, Nuncio said that there is a possibility that the fund would not lack money in the near future. The Garment Worker Center and its colleagues also hope to talk to state government officials to discuss how the Garment Restitution Fund will be kept in better financial condition in the future.

“We consider this a first step in our advocacy work,” Nuncio said. “We don’t want a situation where we have to remind our legislators that there is supposed to be a solvent fund for workers.”

“We see it as a town hall,” Nuncio said. “We’ll listen and hear what are the most pressing concerns for workers, so we’ll make sure that we are a responsive organization.”

In the past 12 months, Garment Worker Center organizers have waged a campaign against Ross Stores Inc. to protest what it contends are poor wages and conditions in factories that produce clothing for Ross Dress For Less. In December 2018 and in May, Garment Worker Center workers held protests at the retailer’s headquarters in the Northern California town of Dublin.