With the Power of One P.O., Everything Can Change for Black-Owned Apparel Businesses

Power of the P.O. 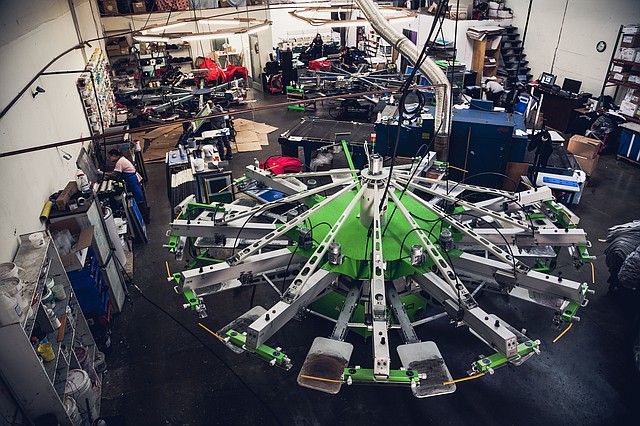 One major deal can change everything for a small company, yet it can be more crucial for determining the success of Black-owned businesses and those led by members of underrepresented groups, said Dawaud Muhammad. As the co-owner of a Black-owned printing-and-embroidery company, Muhammad leads Big Printing Textile Co., LLC, which is located in the San Francisco Bay Area town of San Leandro, Calif.

A big deal with a major company recently helped Big Printing finance an expansion that Muhammad had been trying to put together for years with bank loans. With proceeds from the deal, which started June 15, Big Printing doubled the size of its facility to more than 12,000 square feet, staff was increased by 25 percent, and new machines were purchased. Muhammad described the deal’s transformative strength as “the power of the P.O.” A simple purchase order from a group with deep pockets can expand the horizons of a business and help economically develop the community it serves.

Over 20 years, Muhammad and his wife and business partner, Kesney Muhammad, built their business into what they say is one of the biggest Black-owned printing-and-embroidery companies in America. It designs and decorates for more than 100 clothing lines every month. The company focuses on special-effects printing and has worked with streetwear brands such as Planet of the Grapes, BeastMode and Dope Era, based in Oakland, Calif., in addition to merchandise programs for hip-hop musicians. Despite boasting a successful track record as a business, securing loans seemed impossible. The Muhammads felt their growth had been constrained by a lack of access to capital.

Earlier this year, a bank had denied a loan to Big Printing, and the Muhammads were resigned to more time not being able to expand operations. Then the killing of George Floyd by a Minneapolis policeman put a focus on issues that resonate with the Black community. Big companies wanted to demonstrate that they were allies of the Black Lives Matter movement. They made statements of support on social media, on advertisements and, in the case of one company, T-shirts.

A Fortune 500 company was looking for a Black-owned printer to produce Black Lives Matter solidarity T-shirts for its employees. Big Printing was referred to the Fortune 500 company by the firm’s sourcing agency, which found the printer through trade-show-circuit connections. The company requested that Big Printing sign a nondisclosure agreement so the Muhammads could not identify their new partners.

Through the partnership, Big Printing received an order for 100,000 T-shirts. It was the biggest order of the Muhammads’ career, Kesney said. She and her husband had a range of emotions over this deal.

“It was really a gumbo pot of feelings: elated, scared, overjoyed, terrified, accomplished—damn, this could kill us,” Dawaud said.

“The number of shirts, however daunting, was doable for us. The issue was the timing—or lack thereof. We only had 20 days to complete the order, which should take almost two months with our current workload,” Kesney said.

They hired temporary workers. They pulled double shifts. They contracted out other jobs that they were working on to nearby small, Black-owned screen printers. Big Printing completed the massive job for 100,000 shirts before the July 6 deadline. Their first major client was pleased. Through this accomplishment, Big Printing was referred for more work to other departments within the company, Kesney said. It’s a big step forward. After years of being excluded, Big Printing was included in a powerful business community, she said.

Access to loans for underrepresented groups is a big issue. The Los Angeles–headquartered nonprofit Black Design Collective launched in 2018, in part to help Black entrepreneurs with navigating the always-tough process of financing a project, said TJ Walker, a co-founder of the BDC and teacher at Los Angeles Trade-Technical College. He co-founded and serves as a co-owner of the pioneering Black-owned fashion line Cross Colours, which grew into one of the most popular brands of the 1990s with its motto, “Clothing Without Prejudice.”

The BDC will work with the California Fashion Association to produce a group of seminars, including financing sessions for BDC members, scheduled for the fall, Walker said. He said that while bias does play a factor in determining who gets access to loans, there are other factors in play that add more perspectives. One such factor is that it is tough for any new business to get a loan. “Smaller institutions do not have the credit level of companies that are larger,” Walker said.

A lot of Black-owned fashion brands forecast that they will make a significant number of sales at independent, Black-owned retailers, Walker added. But banks may be wary of granting a loan to a business that will sell goods to businesses without established credit histories. Walker remembers having problems getting access to loans in the early days of Cross Colours.

“At the beginning, it’s hard to get people to believe in a vision,” he said. But his early experience was similar to that of Big Printing. One major P.O. can change everything.

At MAGIC, the first major trade show where Cross Colours exhibited, the clothing line got a chance to expand because it made more than $10 million in orders at the show, Walker said. “It changed the way people looked at us. It gave us the power to get loans and the leverage for funding.”

Still, there is no denying the power of the P.O, Kesney said. “When a corporation extends a P.O., essentially they are extending an opportunity to partner with you. As their business grows, so does yours as a part of their supply chain,” she added. “It is a big corporation’s responsibility to promote equity-enhancing policies by bringing small businesses into their supply chain. When that business is Black owned, you narrow the gap of economic injustices and racial disparity in America. It fuels a healthy economy, uplifts our community and is for the overall good of America.”