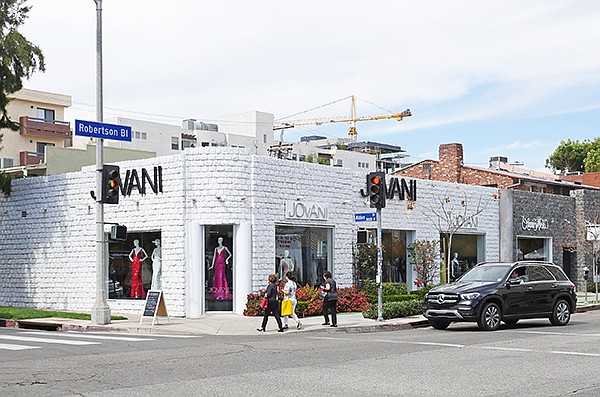 The James Perse brand is scheduled to open its highly anticipated furniture and home flagship and café this month within an 11,000-square-foot emporium on 141 N. Robertson Blvd. in West Hollywood, Calif.

Robertson shop owners and the street’s businesspeople are wondering if James Perse will bring a halo effect and restore Robertson to its place as one of Los Angeles’ top fashion streets. Jay Luchs, vice chairman of the commercial-real-estate firm Newmark Knight Frank, brokered the deal to bring James Perse to the Robertson space formerly occupied by a Ralph Lauren store.

“James Perse is the first sophisticated tenant that has shown up in a while,” Luchs said. “He could have easily opened in Beverly Hills, but he took Robertson. The space was the right size, and it will attract consumers and the trade.” Robertson is a short drive from the Pacific Design Center, which is focused on furniture showrooms.

The prestige and sophistication of James Perse might bring shopping crowds back to Robertson, Luchs said.

Before 2000, Robertson was a quiet street of antiques and furniture shops. In 2000, Kitson opened at 115 S. Robertson Blvd. Kitson was part of a first wave of independent fashion boutiques that dominated Robertson for approximately eight years. Boutiques such as Lisa Kline, Horn, Diavolina and others represented a Los Angeles-–fashion style, which attracted the popular celebrities of the era such as Paris Hilton and Lindsay Lohan.

Paparazzi buzzed around the street’s boutiques and restaurants hoping to snap a photo of an A-lister. Double-decker buses filled with tourists frequently made their way around the street, hoping to give visitors to Los Angeles a view of the street’s dolce vita. Real-estate prices on the main stretch of Robertson, between Beverly Boulevard and West Third Street, skyrocketed to a zenith of $23 per square foot on some parts of the street. Prices per square foot plus triple net currently range between $8 and $12, Luchs said.

At the tail of the boom, the street’s personality started to change. Independent boutiques moved out. Flagships of European fashion houses and high-end specialty stores moved in. The Great Recession hit fashion streets hard at the end of 2008, and the once high-flying Robertson seemed to be pockmarked with multiple vacancies overnight. Even when the economy emerged from the recession after 2010, Robertson continued to struggle.

The popularity of digital commerce was skyrocketing and giving physical boutiques harsh competition. Other retail streets emerged as hubs for boutique retail and became addresses for retailers who would have once lined up for space on Robertson.

The street’s landlords have been criticized over the years for not being flexible and letting storefronts remain vacant for long periods of time. On Feb. 23, there were eight vacant storefronts on Robertson between Beverly Boulevard and West Third Street.

In the past few years, the street’s character has continued to change. Hair salons have moved into stores once occupied by pricy boutiques. A MedMen cannabis emporium opened at 110 S. Robertson. Real-estate company Douglas Elliman Altman Brothers moved into 103 S. Robertson, an emporium-sized building that formerly housed a Lululemon Athletica.

Fashion remains an anchor on the street, however. It’s the address of a Chanel boutique as well as stylish shops such as Curve, more-casual shops such as Lauren Moshi and Kitson. Fraser Ross, Kitson’s founder, remains bullish on the street. His various Kitson shops take up 9,000 square feet on Robertson, but he said that goods and services will continue to play a role on the street.

“Robertson has evolved and there is no going back,” Ross said. “It will remain a mix of goods, services and retail.”

To regain its former cachet, the place needs to bring back independent retailers who cultivate local brands. Ross mentioned how the retail market has changed and real-estate prices continue to be prohibitive to new retailers. So, local retailers most likely won’t come back, he said.

“Hug your tenant,” Ross advised landlords. “They can go anywhere. They are the key to keeping your street alive.”

Peri Arenas has run the Peri.A boutique at 146 N. Robertson since 2017. She forecasted that Robertson is ready for a revival.

“People are definitely starting to come back,” she said. Shoppers are looking for something new after spending time on other Los Angeles streets. “You can’t keep going to the same places. It’s boring,” Arenas said.