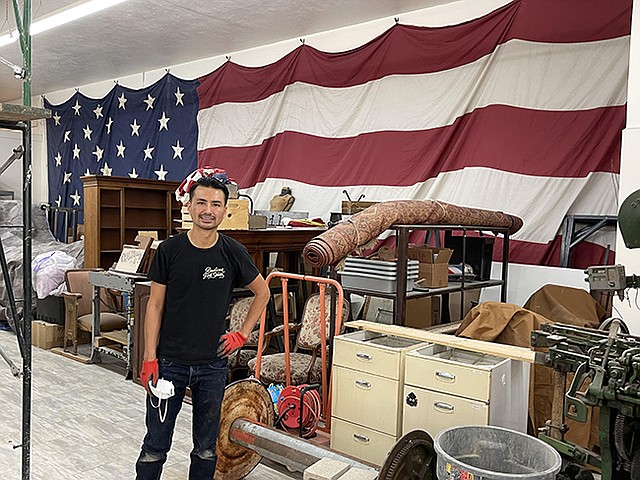 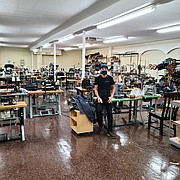 After 10 years in business, the denim brand Railcar Fine Goods is gambling on growth.

In October, the brand opened a new factory that is part of a 13,000-square-foot compound in the downtown area of El Monte, Calif. The remainder of the space will open in December, said the brand’s founder, Steven Dang.

The three-story compound will house a studio where six sewers make Railcar’s jeans as well as a host of other goods such as wool-lined chore jackets and face coverings to protect against COVID-19. The compound also will feature a boutique, a showroom, e-commerce studios and administrative offices.

Dang and other members of his 13-member full-time staff at Railcar are serving extra shifts during which they work as the architects, interior designers and construction crew. They’re laboring to transform a building, originally constructed in 1927, into a suitable space to accommodate the many roles the Railcar staff fulfills. In addition to serving as a factory for manufacturing jeans, the new compound will house a 4,000-square-foot boutique that Dang hopes will act as a community hub. The space on the compound’s street-level floor will offer a barbershop, a tailoring workshop and occasionally serve as an events space where musicians can perform.

Dang and his colleagues made the decision to move from a cramped 4,000-square-foot space in Monrovia, Calif., shortly before the COVID-19 pandemic hit. The lease on Railcar’s former headquarters had ended and its team needed space where they could be more creative, Dang said. 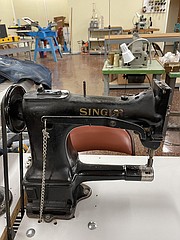 This Singer is one of many vintage sewing machines used to create Railcar’s styles. | Photo by Andrew Asch

“We were squished together. People were walking over each other,” he said. “A lot of development was scaled back because of lack of space. We hope to create more with more elbow room.”

The former space offered enough room where the factory could comply with Los Angeles County’s Department of Health regulations, which require six feet of space between workstations.

Railcar’s El Monte factory is home to the brand’s most-unique feature. The clothes are made on antique sewing machines. Before starting the brand, Dang, who formerly worked as a mechanic forLos Angeles County’s Metro light-rail line, served as a partner in a friend’s now-defunct denim line. Dang experimented producing jeans with sewing machines that were made during the 1920s through the 1960s. He developed a nerd’s interest in these antique machines and often found himself taking apart and repairing broken vintage sewing machines for fun, scouring the Internet for places to source parts for these tools from a bygone era.

Dang and his colleagues believed that denim was given a certain vintage authenticity when sewn using the antique machines. A 1940s sewing machine gave clothes a 1940s look. When Dang made the gamble to introduce his brand in 2010, he kept a vintage style but made the jeans with a contemporary silhouette.

The unique offering of denim that is made in the United States with a modern cut and a vintage style drew a lot of interest. Influential retailer American Rag CIE has sold Railcar at its World Denim Bar almost since the start of the brand a decade ago, said Mark Werts, American Rag’s founder.

Railcar’s vintage inspiration appealed to American Rag buyers, who traditionally have maintained an interest in these types of styles. “Fashions from the ’40s through the ’60s had a degree of excellence and an Americana style that appeals to our aesthetic,” Werts said. The brand has sold consistently well over the years. “Everybody has to earn their stripes every season,” he said. “We don’t run a charity.”

Railcar has been sold overseas in Japan and Korea as well as in several Western European countries. The brand's retail price points in the United States range from $168 to $350. The brand also has developed fans from denim obsessives to fashionistas and even those looking for quality workwear, Dang said. He has chosen to keep his manufacturing domestically so he can oversee production.

“Quality is central. I know what goes into every garment,” Dang said of the granular detail he seeks to bring to his apparel. “I know what needle size is used for every garment.”