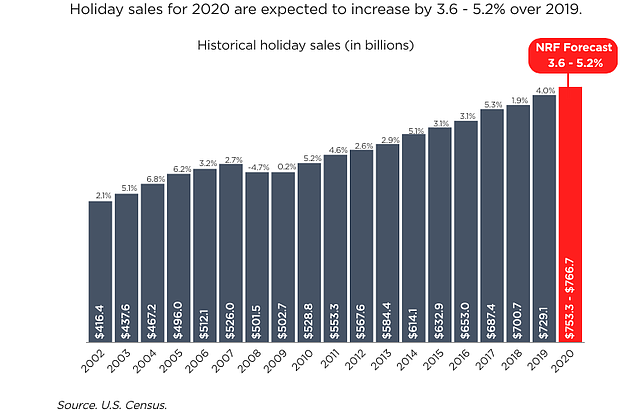 Holiday retail sales will increase between 3.6 percent and 5.2 percent, to between $755.3 billion and $766.7 billion compared to the 2019 holiday season, according to a forecast released Nov. 23 by the National Retail Federation trade group.

The influential Washington, D.C., group released its holiday forecast a month later than its usual early-October forecast. NRF Chief Economist Jack Kleinhenz waited to put together the forecast until more data were confirmed during a turbulent year marked by economic fallout from the COVID-19 pandemic and the United States presidential election.

Recent events have demonstrated that U.S. consumer demand is strong despite months of upheaval. For October, the U.S. Census Bureau reported an uptick in retail sales of 0.3 percent over September. A recent NRF survey also found that 42 percent of consumers surveyed intended to shop early, Kleinhenz said.

“Given the pandemic, there is uncertainty about consumers’ willingness to spend, but, with the economy improving, most have the ability to spend,” Kleinhenz said. “Consumers have experienced a difficult year but will likely spend more than anyone would have expected just a few months ago.”

Consumer savings increased due to stimulus checks and limited choices in dining, entertainment and travel over the last eight months. There’s a lot of pent-up demand, Kleinhenz said.

“After all they’ve been through, we think there’s going to be a psychological factor that they owe it to themselves and their families to have a better-than-normal holiday. There are risks to the economy if the virus continues to spread, but, as long as consumers remain confident and upbeat, they will spend for the holiday season,” he said.

During a Nov. 23 conference call with reporters, Kleinhenz and Matthew Shay, the NRF’s president and chief executive officer, acknowledged that many consumers and retailers are financially hurting when a reporter asked a question on the stimulus package being discussed in Congress.

“Not every sector of the economy has recovered, not every retail business has recovered,” Shay said. “American families are in limbo waiting for additional stimulus. Getting something done before the end of the year would be positive for the economy.”