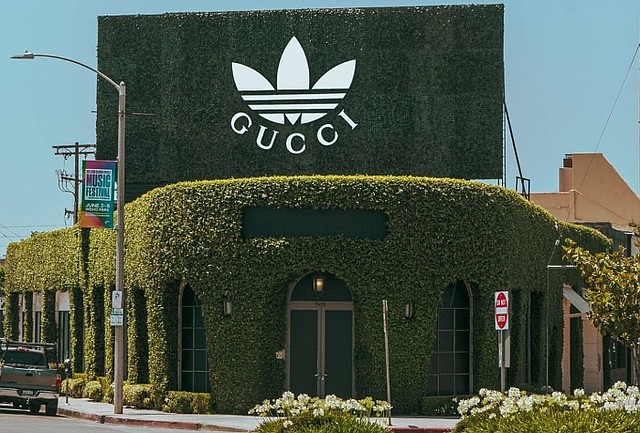 Gucci and Adidas have opened their first pop-up store on Melrose Avenue dedicated to showcasing the kaleidoscopic aesthetics of the Adidas x Gucci collaboration.

The new pop-up is taking over the former Marc Jacobs store and features an immersive retail experience. The ivy-covered shopfront is the first in a series of pop-ups, with another opening in the South Coast Plaza and Wooster Street and Fifth Avenue, Gucci East Hampton, Miami's Aventura Mall, Chicago Michigan Avenue, Houston Galleria, Atlanta Lenox and Holt Renfrew Toronto to follow.

The collection, designed by creative director and designer Alessandro Michele was first unveiled at the “Exquisite” Gucci Fall 2022 and combines tailored style with sportswear style. Pieces in the collection borrow elements from both brands, such as the Adidas trefoil logo blending with the Gucci monogram on pieces including tracksuit sets, shorts, skirts and various accessories.

The Melrose Avenue location opened June 7 with many of the pieces selling out within hours. The L.A. location’s launch event is set to take place June 11, but reservations for a 60-minute timeslot must be made online before June 9.