Seaside Development in the OC 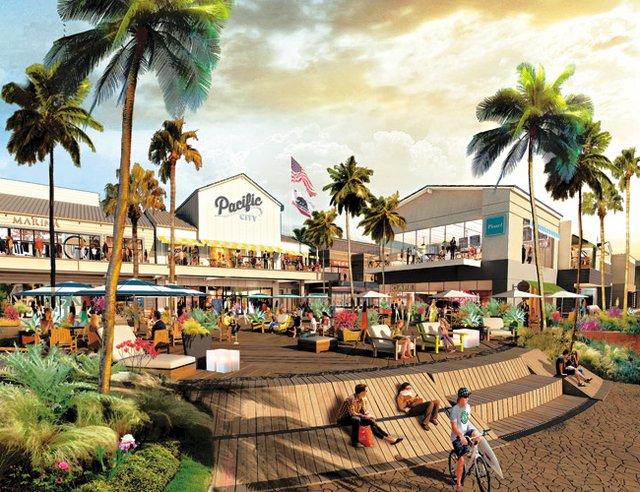 There are few retail centers currently in construction across America, and the upcoming Pacific City development in Huntington Beach, Calif., is ranked among a more select class—it is one of a handful of retail centers being developed along the beach.

HIT THE SURF: The Pacific City retail/hotel/residential project is scheduled to open in late summer 2015 across the street from the surf in Huntington Beach, Calif. (Renderings courtesy of DJM Capital Partners)

The upcoming project is scheduled to open in late summer 2015 and is located at 21002 Pacific Coast Highway, adjacent to The Waterfront Beach Resort. It is a few blocks away from Huntington Beach’s Main Street, which is the address for some of California’s highest-profile surf shops, including Huntington Surf & Sport and Jack’s Surfboards.

DJM is currently in negotiations with a number of retailers to move into the 191,000 square feet of retail and restaurant space with a view of the Huntington Beach Pier. The 11-acre site will contain an estimated 40 clothing stores and 20 restaurants. The Pacific City project also includes plans for a hotel, a residential division and a marketplace for artisanal foods. It will be located on a space that is currently vacant but once was the site of a golf course. Berman declined to state how much DJM will spend to develop Pacific City. “This is a ‘spare-no-expense’ project,” she added.

Larry Kosmont is a consultant in one of the handful of other upcoming beachfront retail developments, the Redondo Beach Waterfront in Redondo Beach, Calif., which is scheduled to debut in 2018. He said it is hard to build a new retail center on the beach because, among other things, most of coastal California has been developed. Also, developing retail on the beach is tricky. “You can hit it out of the park, but you can miss, as well. You got to have the right retail mix, the right parking, the right balance of outdoor and indoor, the exterior and interior amenities. There is a delicate balance of capturing the weather and ambiance and making it work from a retail and hospitality standpoint,” said Kosmont, president and chief executive officer of the Kosmont Companies, specializing in economic development, real estate and public finance.

DJM also developed the Bella Terra mall in Huntington Beach, and the company is aware it must do something unique if it is to succeed in an area that enjoys prominent malls such as South Coast Plaza and Fashion Island as well as specialty retail centers The Lab/Antimall and The Camp, all of which are less than a 30-minute drive away.

“This isn’t what one would think for Huntington Beach,” Berman said. “Take every retailer that sells boardshorts and flip-flops and put them in the project and you’re done. … This will not be about surf theme this and that. We’d like to surprise people a little bit.”

Rather, DJM hopes to build a place where retailers will take risks, experiment with new concepts and even get involved with the local community. Fitness club Equinox was the only tenant that Berman would confirm would open at Pacific City, and DJM is talking to Equinox about developing unique programming for the retail center, such as fitness classes on the beach.

Orange County retailer and men’s clothing brand Tank Farm & Co. has been in negotiations to open a store at Pacific City, said John Anderson, Tank Farm’s president and creative director. His company runs a boutique in Seal Beach, a 10-minute drive north from Pacific City. But he was attracted to the new development for its opportunities. Most retail spaces in exclusive beach towns are leased out, he said, and the only way to find space is to buy out an expensive lease. He also anticipates that Pacific City will offer a well-to-do customer and eyeballs from across the world. “Think of all the tourism in Huntington Beach. It is bananas,” he said.

Pacific City will draw visitors from across Southern California, Berman said, as well as people staying in area hotels and visiting the beach. “If we get it right, we’ll build a place where people will be comfortable coming whether you buy anything or not,” Berman said. “If it is a good destination, people will shop.”

Pacific City also will enjoy other unique features such as a movie wall where visitors can watch films in an open-air space. There will be firepits, as well as seating overlooking the ocean. Pacific City’s retail section will be located next to Lot 579, a culinary marketplace that DJM is developing. It will offer artisanal dishes as well as local seafood, and there will be a smattering of small retail establishments.

The Jerde Partnership, which designed retail centers such as Santa Monica Place in Santa Monica, Calif., and SMS Architects will design the look of Pacific City. The look is planned to be California Craftsman/ beach bungalow, which will take aspects of the classic California architecture styles of craftsman houses and bungalows. Lifescapes International Inc. will develop the landscaping, which will feature indigenous, drought-tolerant plants.