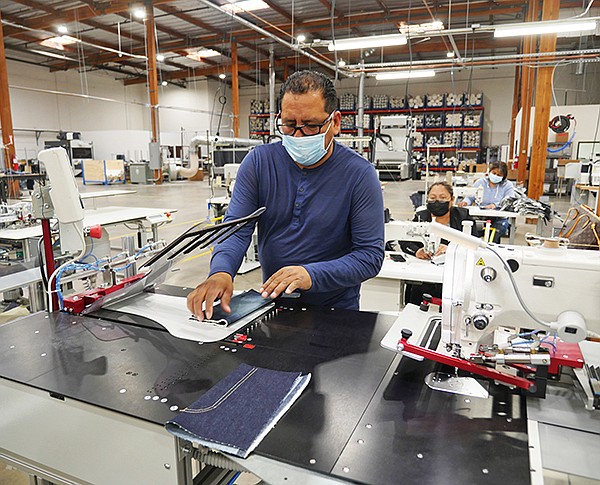 Saitex founder and CEO Sanjeev Bahl with Saitex USA President Kathy Kweon at the Vernon facility, which at full capacity will produce 3,000 pairs of jeans per day

The Vietnam-headquartered company Saitex recently opened a denim facility in Vernon, Calif., just south of downtown Los Angeles. Saitex USA, a 52,000-square-foot denim plant, will serve as a factory of the future, said Sanjeev Bahl, the company’s chief executive officer and founder. Saitex has been running Vietnam-based factories since 2005. Its parent company is the Malaysia-based holding company Saitex Holdings.

The Saitex facility in Vietnam has been acknowledged as a pioneer in sustainable denim production. It has also received praise for environmental and social programs such as planting mangrove forests in Vietnam as well as developing Rekut, an initiative that creates factory jobs for disadvantaged individuals and people with different abilities. Bahl plans on offering Rekut programs at Saitex USA.

Bahl anticipates the U.S. facility will be one of the most automated clothing factories in the world. It’s working to be certified by respected sustainability and fair-trade organizations such as the Fair Trade Federation. It also hopes to get certified as working from LEED environmentally sustainable buildings and is seeking classification as a B Corporation, which meets the highest standards for verified social and environmental performance. Current clients include well-known brands such as Ralph Lauren, Madewell, Filson, Edwin USA, Outerknown and Atelier & Repairs.

John Moore, the co-founder of Outerknown, said that he is working with Saitex USA to improve his brand’s speed to market and quest to develop cleaner manufacturing. “We only work with makers who can deliver on our sustainability goals,” Moore said of Saitex USA. “[It] allows us to move faster to work more closely with their team to deliver on our promises with more variety in our assortment throughout the year.”

Outerknown’s established programs will remain in Vietnam, though the brand anticipates developing new fits and washes at Saitex USA.

While environmental and social considerations are key to Saitex USA’s mission, Bahl also opened the factory to have a financial impact. He forecasted that manufacturing is returning to the United States. Bahl said that consumers are increasingly demanding supply chains deliver fast speed to market.

“There is an appetite for just-in-time delivery,” Bahl said. “There is a market that can support this venture. It’s not like we’re trying to create a new avenue for consumer behavior. That behavior exists. People prefer eating organic and local food. The localized movement is here to stay. The government also is behind it. If you look at the Biden administration’s plans, they definitely have a huge agenda to make locally. It’s all timing. If you tried to do this 10 years ago it might have been more difficult. Today, the scenario is different, the landscape is different, and the opportunity center is different.” 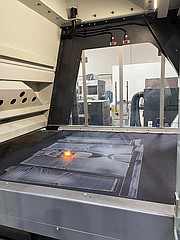 The Matrix laser cutter is just one of the advanced technologies Saitex USA will ultimately employ.

When Saitex USA is at full capacity, it will employ 300 people, said Kathy Kweon, president of the stateside company. Capacity will be 3,000 pairs of jeans per day and 15,000 per week. Bahl considers the Los Angeles factory a bit like a microbrewery, producing locally for people who live nearby. He’s interested in building more Saitex factories in the United States; however, there is no timeline for that yet, he said.

“If you want to bring manufacturing back and make it profitable, there’s a way to do it,” Bahl said. “You cannot continue to do it traditionally. You need artificial intelligence, you need robotics, high-tech lasers and the system of hybrid manufacturing where you allow people to also participate on a new platform.”

Saitex USA is currently the only factory in the world that uses the advanced Matrix laser-cutter machine, which is made by the Italian company SEI. It also uses washers made by Jeanologia and Tonello, as well as techniques such as semiautomatic sewing and robotic spraying. In addition, it has implemented a state-of-the-art water-recycling system and incorporated a cloud-based digital platform.

Agreeing with Bahl are other industry players who anticipate the start of a wave of micro mills that could revive American manufacturing. Jeffrey Shafer, who has served as founder and CEO of the brands Agave Denim and Bluer Denim and is currently CEO of the women’s performance-underwear brand Branwyn, spent years looking to manufacture sustainably in a smart and profitable way.

“Automation will bring manufacturing back to the U.S. It’s important to be closer to the market to reduce your carbon footprint and be closer to consumers. This is for all kinds of businesses. Saitex is just the pioneer,” Shafer said.

Scott Wilson, the president of Tour Image, dba Ustrive Manufacturing, a U.S. factory that received its GOTS certification for sustainable manufacturing in 2019, said that Saitex might encourage other stateside manufacturers to develop sustainable practices and become better environmental stewards.

“Organic, locally made products are the future,” Wilson said. “Without it, there is no future.”