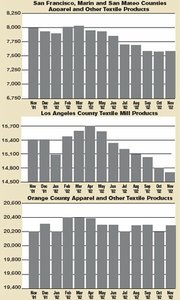 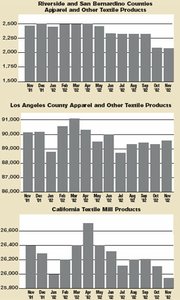 The state’s apparel industry had very little to celebrate this year jobwise as a result of clothing manufacturers scaling back their operations and taking a cautious stance. Overall, there was a 3.4 percent decline in the state’s manufacturing sector this year, with a 1.5 percent decrease in all non-durable goods, including apparel and textiles, according to data compiled by the California Employment Development Department (EDD).

Poor retail sales for the last five years led to the shuttering of San Francisco–based denim icon Levi Strauss & Co. last April. The company announced the closure of six U.S. plants and the shedding of 3,300 workers, including 100 employees in Northern California.

In Los Angeles County, apparel and other textile products employment was down about 600 jobs this year, from 90,100 employees in November 2001. The recession and a wave of small economic aftershocks after the Sept. 11, 2001 terrorist attacks combined to decelerate some businesses’ apparel sales during the year, forcing several Los Angeles–based fashion labels, including Bisou Bisou, Guess and BCBG Max Azria, to reduce their operations sharply. Guess attributed a tough retail environment and lower-than-expected quarterly earnings in September—which dipped 8.5 percent to $157.8 million, down from $172.4 million the year before—to the company’s decision to close some of its corporate facilities and terminate an undisclosed number of jobs, mostly from the corporate and administrative ranks, a company representative said.

Employment in apparel and other textile products in Orange County increased from 20,200 jobs in November 2001 to 20,300 jobs for the same time this year. Sources attribute that growth to a booming surfwear industry. “A number of surfwear manufacturers have helped add jobs to the county, particularly in coastal communities,” said Ann Marshall, a labor market consultant for the EDD.

In Riverside and San Bernardino counties, apparel employment shed 300 jobs, from 2,400 employed in November 2001 to 2,100 employed the same time this year.

In San Francisco, Marin and San Mateo counties, apparel employment decreased by 400 jobs, from 8,000 employed in November 2001 to 7,600 employees the same time this year. Overall, Bay Area apparel jobs have declined dramatically over the past four years, from 13,800 jobs in November 1998 to 7,600 jobs this year. Some of those jobs are expected to return as remnants of the dot-com boom continue to faze out of the South of Market district, where the city’s apparel manufacturing flourished during the 1980s with apparel makers such as Esprit de Corp, which shifted all of its production to Asia this year. In the meantime, apparel makers continue to spring up across the San Francisco Bay, although this currently cannot be verified since the state Department of Labor does not collect apparel and textile employment information from Alameda County. —Claudia Figueroa