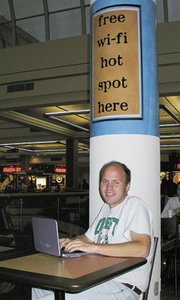 Attracting shoppers to stores is the oldest retail problem. The South Bay Galleria shopping center in Redondo Beach, Calif., hopes to solve this ancient problem with the latest in high technology.

It’s called the high-speed wireless Internet, or “Wi-Fi,” short for “wireless fidelity.” In September, the Galleria debuted a free Wi-Fi hot spot in its food court, making it one of the first malls in Los Angeles County to build a Wi-Fi center.

Across the United States, shopping centers lag behind hotels and cafes in building these high-speed wireless Internet lounges, where people with Wi-Fi access on laptop computers or handheld computers such as the Blackberry pager can read e-mail and surf the Web without plugging their computers into an outlet, said Eric Caleb Black, founder of LA Unplugged, the Hermosa Beach, Calif.–based company that set up the Galleria’s Wi-Fi system.

Since the launch of the mall’s Wi-Fi center, the Galleria’s regional marketing director, Michaela “Mickey” Marraffino, estimated that every day, five to seven people bring their computers to the food court, which seats 560 people. The Wi-Fi customers Web surf for an average of 45 minutes, spend an estimated $7 to $10 on food, and then browse at the shops.

The revenue made on the new shoppers’ lunches exceeds what the Galleria’s management spends on the Wi-Fi center. Setting up the hot spot cost more than $2,000, and the mall spends $70 each month for Internet access.

Marraffino approved the project after reading newspaper articles about the Wi-Fi industry. “A lot of the decision was based on how much it was going to cost, and the cost was minimal,” she said.

The Galleria has no immediate plans to increase the space of its Wi-Fi hot spot beyond the food court, but there’s a good chance this mall is at the crest of a trend. For C. Brian Grimm, a spokesman for the Wi-Fi Alliance, a nonprofit group of businesses advocating the growth of the technology, Wi-Fi enabled laptops should be as ubiquitous as cell phones soon. The computer cards making laptops Wi-Fi accessible are being manufactured into most new machines.

Roots in retail and coffee shops

Debuting in 1999, Wi-Fi first found retail use in managing warehouses and inventories at large stores such as Home Depot. Recently, Wi-Fi retail uses have included linking stores to the Internet and connecting stores’ outside operations, such as powering unconnected registers during a sidewalk sale.

While attracting business travelers with Wi-Fi centers had been the domain of hotels and airport lounges, the Starbucks Corp. debuted subscription-based Wi-Fi hot spots at 1,200 of their cafes in 2002 and expanded the concept to 2,700 cafes in late 2003. Starbucks’ Wi-Fi is managed by wireless company T-Mobile USA Inc. Consumers can log on at any Starbucks for $6 per hour or $29.99 per month.

The concept has been a success, said Starbucks spokesman Nick Davis.

“Wi-Fi is bringing people in at different times of the day, not just the 6 to 9 a.m. window, when a majority of our patrons buy coffee, and they’re staying longer,” he said. “On average, 70 percent of customers come in for five minutes or less. Hot spot users come for 45 minutes.”

People do not have to pay to connect to the South Bay Galleria’s Wi-Fi hot spot, but they must obey some rules. When users log on, the system takes them to a contract page that demands them to not surf pornographic or “hate” Web sites. Once users click on an accept button, the Galleria’s Wi-Fi then guides them to the shopping center’s Web site. After that quick pit stop, browsers are free to surf almost anywhere.

The Galleria plans to market its Wi-Fi hot spot by word of mouth and by registering at Wi-Fi directories such as www.wi-fihotspotlist.com. The Galleria has also posted blue signs in its food court that say “Wi-Fi access here.”

It’s an idea that people are still getting comfortable with, said some Galleria employees.

“Some people are confused by the signs,” said Jeff Shang, a clerk at H. Salt Fish & Chips in the Galleria’s food court.

“The other day, a 14-year-old girl asked me where the computers are connected,” Shang said. “I don’t think a lot of people are hip to it yet. They should [be]. It’s convenient.”