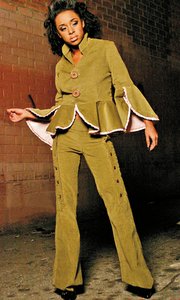 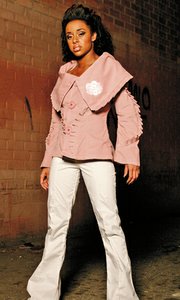 In the beginning stages of his career, designer Merlin Castell constructed a last-minute party ensemble out of 75 cent pocket-liner fabric and then made a hefty profit when several partygoers offered to buy the shirt right off his back.

The designer of D’Merlincastell has countless such stories in which he was able to employ his design skills to stretch the ability of the fabric he was given.

Castell has designed men’s clothing since 2002, using himself as his best advertisement. He unveiled his women’s collection for the Fall 2005 season at the Pool Trade Show.

The line’s looks—with ruffles arching over the front and back of pant legs or spiraling around arm sleeves—are designed for mature women who have an appetite for nontraditional styles.

Castell showed his resourcefulness through a jacket with piping-like trim along the outside back seams that he created using a stitch traditionally employed for the inside of a garment. “As I designer, you do not have to be led by the material. You lead the material,” he said.

The designer originally studied architecture in his native Honduras before going to fashion school in Mexico. His architectural education influences the construction and shape of his garments, which do not follow the conventional lines of tailoring. “I’m trying to establish new cuts because we are already in 2005, and we don’t have anything new. We’re still using the same patterns and same basics,” he said.

Wholesale price points range from $32 for a cotton/spandex halter top to $85 for a corduroy coat with a 1950s-style wide collar. Castell found additional inspiration from his first name, Merlin, adding a slightly medieval and renaissance look to his women’s line.

Castell’s made-to-order dresses are extremely body-conscious, with some featuring sexy cutouts around the chest and stomach. His Fall season features low-cut corduroy pants and deep halter tops, but for Spring 2006, he is introducing a more forgiving jeans style that he described as a “Wonderbra for the behind” because of the corset-like seams that lift the rear.