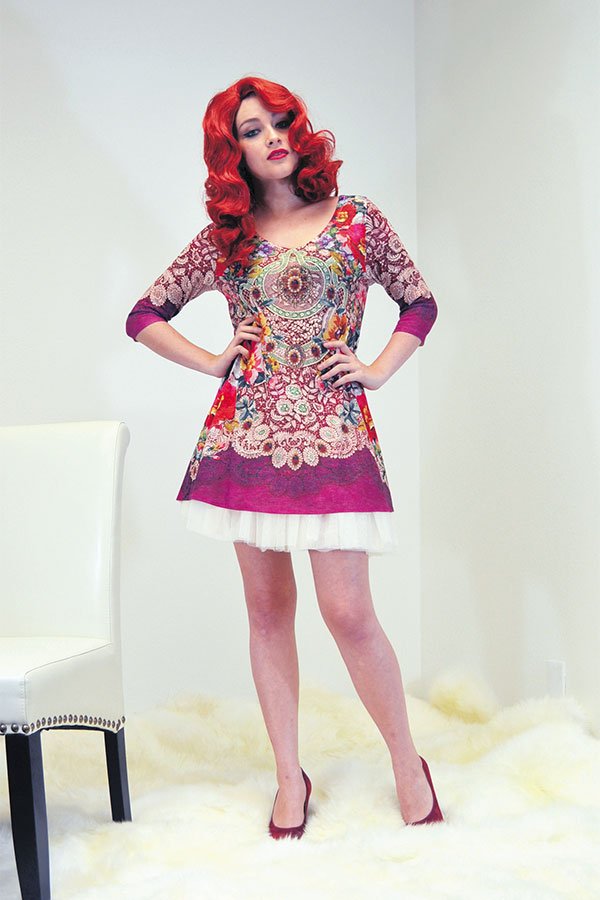 Amma Design: From Sarajevo to Made in LA

Amila Malovic walks past the rows of brightly colored fabric that make up her print-driven tunics, tops and dresses sold under her label, Amma Design.

There are bright reds mixed with vibrant greens interspersed with dusky oranges that form a kaleidoscope of color. As many as three different prints make up one garment—one for the front, one for the back and one for the sleeves.

“It is a very complicated process,” Malovic says, describing her collection of flower prints, paisley designs and geometric swirls that look more like paintings than fabric. “Each piece of the garment is printed separately and then put together here.”

Malovic and her 16 employees do everything—from creating the fabric designs, transferring the designs to fabric and then sewing the garments—in a 2,400-square-foot office inside an industrial park in the Los Angeles suburb of Torrance. Malovic even prints her own labels and then cuts them out.

The space is made narrow by an ample supply of cardboard boxes filled with fabric, paper and thread, crowding the corridors. Racks of patterns and clothes knock up against a small photo studio in the corner.

The back room, with eight sewing machines, shares space with a large heat-transfer machine that takes print designs from chemically treated paper and puts them on polyester fabric.

Even Malovic’s small office is a study in precarious furniture placement. Tall wooden bookshelves are filled with publications about wildflowers, plants and patternmaking. Two wooden writing desks are crammed with Apple computer screens and piles of paper. A couch is wedged into the corner.

Malovic, a graduate of the University of Sarajevo’s Academy of Fine Arts, moved into this office only two years ago, but already she is expanding to a 4,400-square-foot space two doors down to accommodate the rapid growth of her label, launched in the fall of 2009. Revenues have climbed from $250,000 during her first four months in business to $1.2 million last year.

But life wasn’t always so rosy for Malovic. In 1992 she fled her hometown of Sarajevo to Los Angeles with her husband and two young sons when a bloody civil war gripped the capital of Bosnia-Herzegovina.

Lasting nearly four years, it was the longest siege of a capital city during 20th-century warfare and killed an estimated 12,000 civilians.

When the fighting stopped, Malovic and her two sons later followed her husband, Salem, back to Sarajevo, where they ran a graphic-design studio.

But four years of war had done its damage. In 2002, Malovic returned to Los Angeles with two suitcases, $2,000, and her two sons, Mak and Miran. “My hopes were really big when I moved back to Sarajevo. I was hoping my knowledge from Los Angeles would be useful over there,” the designer said. “But it was a big disappointment. The country was ruined, and the economy was so bad. How can you expect people to buy your expensive designs when they can’t even buy food?”

Moving into a West Los Angeles apartment where her older sister lived, Malovic started to reconfigure her life. Soon she was working as a designer at SimsoTex in Compton, Calif., which does sublimation printing. She moved on to a design job with pajama maker P.J. Salvage in Irvine, Calif. Later she worked as a designer for womenswear maker Nally & Millie in downtown Los Angeles.

In 2009, she was able to leave her full-time job and launched Amma Design from her townhome in Redondo Beach, Calif. An enormous digital printer took over her living room. The dining room was used to cut out designs printed on paper. “Every part of my home was converted into a business area, except for my youngest son’s room,” she said. “Even the covered patio was used for samples.”

Everything else was done with various contractors in downtown Los Angeles. But Malovic said her dream was to move her production in-house.

“I lost all my money that first year,” she said.

Malovic said her contractors were printing on damaged fabric, which couldn’t be returned once used. And her sewing contractors often didn’t deliver on time.

Last year, Malovic completed her dream of 100 percent in-house production when she bought her own $35,000 heat-transfer machine to make sublimation prints.

In-house production helps keep wholesale prices at $39 to $68. Malovic sells primarily to specialty stores in the United States and Canada. But she has sold to a few stores in Germany, where she has a small following she would like to grow.

One example of her European following is one customer emailed her from Germany, asking to place an order and then have it shipped to Las Vegas, where the woman’s husband was in town for business.

“Sometimes it is not money that makes you happy but the response from other people,” Malovic said.

Amma Design’s vivid hues are popular with Southern California boutiques. Elyssa Goldberg, owner of BG’s El Paseo in Palm Desert, Calif., said she sells the line because she was attracted by the bright colors and prints that are the label’s mainstay. “I’m in the desert, and my store is all about color and prints,” she said. “Amila is always coming up with new prints and new ideas.”

Barbara Keller, owner of Harari in Beverly Hills, Calif., and Scottsdale, Ariz., said she, too, was attracted by the label’s array of shades. But she also appreciated the silhouettes, which are not boxy but tapered at the waist. “They are easy, free shapes,” she explained. “Our customer is a little bit of a more mature woman, and they are flattering on that customer. The colors are amazing.”