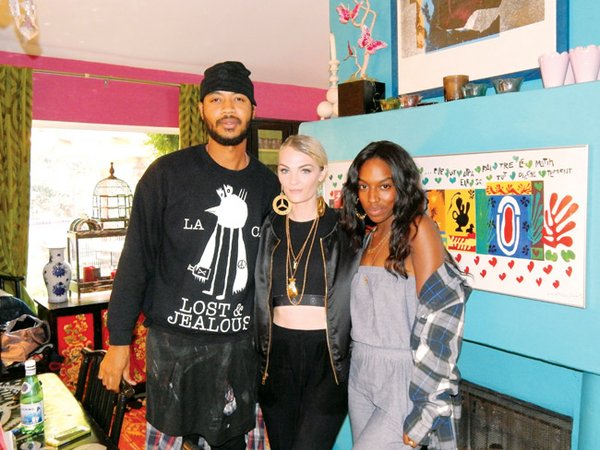 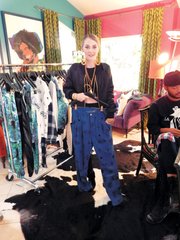 THE COLLECTION: Marta Goldschmied shows off some looks from her new streetwwear line.

When Adriano Goldschmied was just starting out in the fashion industry, the denim guru surrounded himself with creative people and learned the clothing business the hard way—through trial and error.

Goldschmied ended up co-founding the Italian brand Diesel before moving to Los Angeles more than a decade ago and starting two jeans lines—AG Adriano Goldschmied and Goldsign. He is also working with the Los Angeles denim brand Citizens of Humanity as vice president of product development.

Now his daughter, Marta Goldschmied, is following in his footsteps. But instead of concentrating on denim jeans, she is trying to make her mark in the luxury streetwear arena.

She and a small band of contemporaries recently launched Emm Gold by Marta Goldschmied, a luxury streetwear brand designed to capture the millennial generation’s growing interest in urban wear.

“I want to do for luxury streetwear what my father did for luxury denim,” said Goldschmied, surrounded by her two colleagues at the Goldschmied family residence in the Hollywood Hills. There is Marika Amegah, the label’s designer, and Aris Tunson, the marketing director. Goldschmied is the creative director. They have all known each other since high school.

Goldschmied has been enamored with streetwear ever since she arrived in this country 13 years ago as a 12-year-old schoolgirl who didn’t speak English. She went on to study at Venice High School before working as a salesperson at American Rag on La Brea Avenue and studying at the Fashion Institute of Design & Merchandising. “I’ve always been interested in streetwear. To me it is an exciting world and different.” 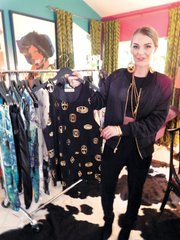 THE COLLECTION: Marta Goldschmied shows off some looks from her new streetwwear line.

Goldschmied’s first collection will be available online in December as well as being carried at American Rag. Mark Werts, founder of the American Rag stores, believes talent is genetic. “I think the line is great and new, and I think she has her hand on something that could be very big,” he said.

Emm Gold’s first collection is called the “Death Row” edition. The edgy moniker is indicative of the plight of today’s young people whose future is bleak in a world where a talented and educated younger generation is scrambling to find jobs. “In a world of pre-determined existence, the youth has been charged and found guilty by the actions of past generations,” says the look book’s introduction to the collection. “Their sentence is to be carried out by means of minimal accommodations that deem adaptation as a necessity.”

The concept behind Emm Gold is that luxury streetwear is the new work uniform for the younger generation—people who are not going into an office and not wearing a suit because jobs are so hard to find. Instead, they may be toiling at home on freelance projects or creating their own businesses. “Everything that is going on culturally and economically has really affected what people wear,” Goldschmied said.

She and her colleagues believe streetwear is just at the beginning of its popularity. “I think it has to do with the music and art culture. Everything is influenced off each other,” Amegah said. “Lots of rappers are talking about fashion, and streetwear has become more fashion-oriented.”

The Emm Gold team was thrilled to see the New York streetwear label Hood by Air on the cover of Style.com’s fifth printed edition in November. Or that Ashish, a London streetwear line designed by Ashish Gupta, received solid reviews during the most recent London Fashion Week. “People go to their comfort item to wear,” Goldschmied said. “And the youth today, whether it is Los Angeles or Paris, their comfort item is streetwear.”

Key items in the collection include a green-and-blue poly/satin sublimated-print lounge pant with a matching bra top and printed bomber jacket, a sublimated thermal T-shirt with matching leggings printed with Russian prison tattoos, plaid baggy-fit pants with a baseball vest that has perforated leather details and also has a matching oversized button-up hoodie, and ribbed lounge pants with suede detail that are paired with a ribbed tank top. In a nod to her father’s denim background, Goldschmied is doing an indigo baggy jean printed with black Russian prison tattoos.

Everything is made in a factory on Hill Street in downtown Los Angeles. Wholesale prices range from $23 to $227. “The collection is easy to wear and casual. Some of the pieces are a little wilder,” Goldschmied said.

It would seem only natural that Goldschmied would gravitate toward fashion. She has interned at Citizens of Humanity, working on look books for Goldsign and Citizens. But her father hasn’t stepped in to guide her new venture. His advice has been limited to words of wisdom such as “Surround yourself with creative people” and “If you are going to do one thing, do it well.”

Adriano Goldschmied himself said he has stayed in the wings, letting his daughter find her own way. “This story of elevating the streetwear to luxury is exciting, but it is totally not my thing,” he said.

He loves seeing the energy she is pouring into the concept and sees the same energy he invested in his first endeavors. “But I was very clear to Marta when she started out. I said, ‘You have a good name in the market and that is it. No more than that. You have to do it for yourself.’”

He said when he started out, nobody helped him, “and I think that is a very good school.”