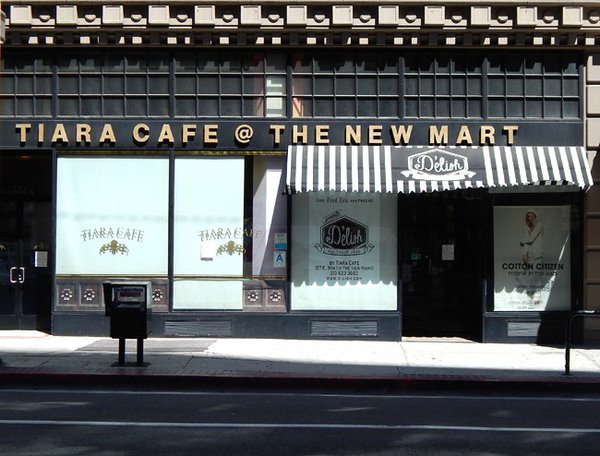 Who Will Replace the Tiara Café?

After more than seven years of serving healthy, California-style cuisine, the Tiara Café has closed its doors in the Los Angeles Fashion District.

Located on the ground floor of The New Mart showroom building at 127 E. Ninth St., the restaurant was opened by Los Angeles chef, restaurateur and caterer Fred Eric in 2006 after the space had been vacant for three years. The Tiara Café’s last day was March 19, the final day of the Fall 2014 edition of Los Angeles Market Week.

“I think we did a pretty good job of being there for more than seven years. But when market week is only four or five times a year, business is up and down,” said Eric, who over the years has opened and closed a number of Los Angeles restaurants, including Olive, Vida, Airstream Diner and Liberty Grill. Currently, he operates Fred 62, a 24-hour diner in the Los Feliz area of Los Angeles.

Eric had wanted the Tiara Café to be open for dinner, a concept he experimented with, but the lack of evening foot traffic in the area didn’t make it profitable to stay open later in the evening. “Doing dinners at night is ‘make or break’ for that location,” Eric noted.

The long-time restaurateur will be putting his time and energy into opening another Fred 62 in Santa Monica, Calif., where he is scouting locations.

The Tiara Café was a special restaurant for a special location. Ethan Eller, who manages The New Mart, said it took nearly eight months to find a replacement for Sam’s Deli, which had been in the historic building for 40 years until it closed in 2003. Then it took more than a year to complete a $1 million renovation of the space, which could seat 100 people. Eric paid for $200,000 of the rehab project, and the building’s owner, The Ben and Joyce Eisenberg Foundation, paid for $800,000.

“This is so sad. I am in total denial,” Eller said, noting that The New Mart wasn’t charging the restaurant any rent for the last eight months. “For us, it was always a loss leader. We never charged true market rent. We wanted to have a value-added place for our tenants. We wanted to have a fabulous restaurant in the neighborhood for a meeting place or a gathering spot.”

The Tiara Café was one of the first upscale restaurants to venture into the Fashion District. It arrived long before Umami Burger near the Orpheum Theatre on Broadway, Gram and Papa’s (now closed) on Ninth Street, or the Pattern Bar at the corner of Ninth and Los Angeles streets. It opened after The New Moon Chinese restaurant had established a popular foothold on Ninth Street.

The Tiara Café’s décor had a fashionista vibe with pastel colors and all things feminine. While some saw it as designer-oriented, Eric called it “art nouveau meets Japanese animé.”

There were artificial trees with fake hanging moss, fairy-like animé drawings on the walls and booths upholstered in a deep-blue material. The menu changed, but some of the staples were pizzettes; freshwiches, or sandwich-like fillings wrapped like a Vietnamese spring roll; soups; and salads.

Eric is trying to sell his Tiara Café restaurant concept, talking to potential buyers. The building’s management has also put out feelers to restaurant and real estate brokers to see who might be interested in moving in.

The restaurant business has been a challenge in the Fashion District. At the end of last year, L’Angolo Café shuttered its space at 101 W. Ninth St. with plans to open a new restaurant later this year in West Los Angeles. Coming soon to the former L’Angolo Café location is an Argentine eatery called 1810, which already has a restaurant in Pasadena, Calif. It will be open for lunch and dinner.

A few months ago, Bret Thompson, owner of the Market restaurant, which opened in 2009 on the ground floor of the Cooper Design Space, sold his eatery to Ellie Chang, a seasoned restaurant owner whose previous ventures include R23, a now-closed high-end sushi restaurant at 923 E. Second St. in the Arts District, and Yorkshire Grill at 610 W. Sixth St. in downtown Los Angeles.