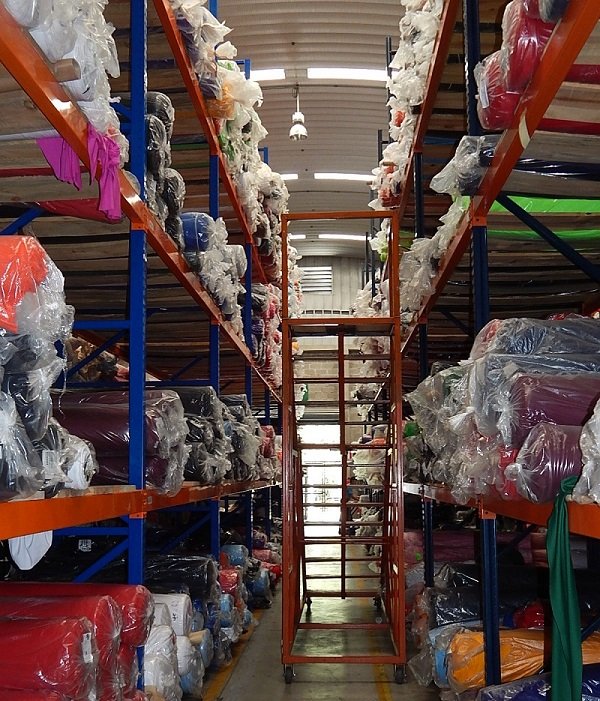 To keep up with demand for quick-turn orders, Custom Made Services, a full-package company in Guatemala, is based in a more technical warehouse that helps the company pick fabric faster. The company also bought an ERP (enterprise resource planning) sys­tem to help replenish orders quickly.

GUATEMALA CITY, Guatemala—Mounds of knit fabric printed with colorful images of Charlie Brown, Snoopy and Lucy are piled up inside the vast warehouse area of Imperial Fashion, a full-package supplier that knits, dyes and finishes fabrics that go into T-shirts.

The T-shirts are cut and sewn for companies that have li­censes for characters such as Hello Kitty, Snoopy, Batman, Angry Birds and several Disney properties. The company’s No. 1 customer is Kmart, for whom the company made 5 mil­lion pairs of Joe Boxer pajamas last year. Its No. 2 customer is Walmart.

Imperial Fashion is expecting its business to increase 10 percent to 15 percent this year as more U.S. retailers and ap­parel companies look south to Central America now that fast fashion has turned up the heat on turnaround times.

"Our clients are looking for quick response. The problem is they want the same prices as Asia, and that is a complicated problem for us," said Juan José Massis, whose family runs Imperial Fashion. "My idea is that with all the problems with Bangladesh and Chi

PILE IT ON : Mounds of fabric printed with images of Charlie Brown, Snoopy, Linus and Lucy fill the warehouse at Imperial Fashion.

na, people are moving their sourcing to other areas. Dis­ney is completely out of Bangladesh."

At Custom Made Services, a full-package company that makes a lot of fan wear and team uniforms, time is of the essence. Four years ago, the company moved to a newer facility that has a more technical warehouse for picking fabric faster. The company also bought an ERP sys­tem to help replenish orders quickly.

When the compa­ny launched in 2004, deliveries were done in 12 weeks. That got whittled down to nine weeks, said Rafael Sandoval, the company’s president. "If we have a con­tract with the cus­tomer and have the fabric available, we can do deliveries in two weeks," he said, noting he works with Teamwork in San Diego and Akadema in New Jersey.

Quick turn has always been one advantage for Gua­temala and the other Central American countries that make up the Dominican Republic–Central American Free Trade Agreement. But it is becoming more important than ever.

That was a theme echoed by the exhibitors at the annual Apparel Sourcing Show, held May 20–22 in Guatemala City.

Another part of the exhibition floor was oc­cupied by Guatemalan apparel manufacturers and textile mills hoping to snag more business with U.S. apparel brands.

"The strength of this region is being fast, and it is hard to replace that in Vietnam," said Keith Dartley, president of Swisstex Direct, which has textile factories in El Salvador and Los Angeles.

Quick turn is the reason that Joseph Greco, president of Greco Apparel in Pennsylva­nia, was walking the show floor. He has been sourcing a polyester/cotton/spandex fabric from Liztex, the largest textile mill in Central America, for scrubs that are cut and sewn in the Dominican Republic. "My scrubs client was producing in China with a four-month lead time," he said. "Now, once we get the fabric to the Dominican Republic, it is a five-week to six-week turn time."

He is also taking advantage of the tariff-free status for synthetic fabrics, whose duties can be as high as 32 percent per garment if shipped from a non–free trade agreement country.

Duty-free synthetics has been another at­traction for sourcing managers. It is so big that a large hub of synthetic fabric producers spe­cializing in performance wear has popped up in El Salvador and is taking hold in Guatemala and other Central American countries.

When the Los Angeles–based company opened its knit fabric venture in El Salvador in 2007, it was knitting, dyeing and finishing about 70,000 pounds of fabric a week. That has grown to 280,000 pounds a week, Dartley said. The company produces polyester fabric for Under Armour, Adidas, North Face and Dick’s Sporting Goods. It also does novelty cotton blends and cotton/polyester fabric. Re­cently, the factory added sueding and napping capabilities.

David Gren, Hampshire Interna­tional’s president, was at the show talk­ing to fabric vendors about supplying the factory, which makes tops for For­ever 21, Wet Seal, Eddie Bauer and others. "The T-shirt business has become fast fashion," he said. "Before, lead times were 12 to 16 weeks. Now they are eight weeks."

But even with a free-trade pact with the United States, the apparel industry in the region is only making slow strides because of compe­tition with Asian countries where labor rates are one-third of what they are in places such as Guatemala.

"The industry keeps improving every year but not as fast as we would like it to," said Ser­gio de la Torre, Guatemala’s economy minister and the owner of Actex Trims, which makes woven labels, hangtags and heat-transfer la­bels.

The Guatemalan government is working on a program in which four towns located be­tween the country’s two major ports would set up a special development zone where workers would earn salaries that are much lower than in the rest of the country. In Guatemala, the average minimum wage for an apparel worker is $375 a month with benefits.

"People in this area are asking very strongly for employment," said de la Torre, noting this is a very poor agricultural area where people sometimes earn no more than $4 a day with temporary work. "The people in the towns and the mayor are proposing a new minimum wage that would be different from the rest of the country."

That wage hasn’t been established yet, but a commission of politicians, residents and employers is meeting to establish a salary of around $175 to $200 a month, which would fall somewhere between Haiti’s minimum wage and Nicaragua’s minimum wage.

Goods from factories in this zone would be relatively close to the country’s two main ports—Puerto Quetzal on the Pacific Ocean and Puerto Barrios on the Atlantic Ocean. Those ports are only a three- to four-day boat trip to either coast of the United States. "We think we can compete with a lot of companies in Asia with this," de la Torre said.

The government is also pushing to extend the investment and employment law that has in the past eliminated income taxes paid by new companies investing money and employ­ing people in Guatemala. It has been one of the driving vehicles to building up the apparel industry in Guatemala. About 60 percent of the country’s apparel and textile concerns are Korean-owned.

Many fear if Congress doesn’t extend this law and it expires, Guatemala’s apparel and textile industry will be decimated.

The economy minister believes it will pass soon.