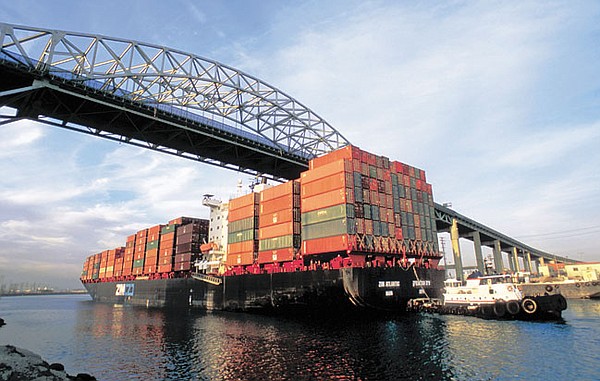 CLEAR CRUISING: A cargo-container ship piled with imports sails into the Port of Long Beach.

No Change on the Waterfront as Cargo Slowly Clears the Ports

By the beginning of the holiday shopping season, normally there would be no sign of any cargo-container ships moored beyond the port breakwater waiting in line for days to dock.

But this is no normal year for apparel importers unfortunate enough to still be waiting for their holiday merchandise to clear the ports of Los Angeles and Long Beach, which handle about 40 percent of all the cargo that is destined for the United States.

The protracted contract negotiations between the International Longshore and Warehouse Union and the Pacific Maritime Association, which employs the longshore workers at 29 West Coast ports, have stalled until Dec. 2. Charges of work slowdowns at the ports have continued.

In addition, a chassis shortage has continued as larger ships make their way to the West Coast.

That meant that as of Tuesday, Nov. 25, there were six cargo-container vessels waiting for dockside space. That is a vast improvement over the 12 cargo-container ships that bobbed beyond the breakwater on Nov. 23. But it is a see-saw situation with more ships on the way.

Between Nov. 26 and Nov. 28, another seven cargo-container vessels were scheduled to show up with no space immediately available at the twin ports. The vessels would have to play the waiting game like everyone else.

“The fact that seven more are coming to anchor between now and the end of the week indicates the congestion continues,” said Capt. Kip Louttit, executive director of the Marine Exchange of Southern California, which monitors the arrival and departure of ships at the ports of Los Angeles and Long Beach.

The situation was no different at the Port of Oakland in northern California, which had four cargo-container ships waiting for spaces at the smaller port. Normally at this time of the year, there are no ships waiting for berths. “It is days to weeks to get cargo off the docks here,” said Capt. Lynn Korwatch, executive director of the Marine Exchange of the San Francisco Bay Region.

The Thanksgiving holiday didn’t help matters. Longshore workers officially have a 24-hour holiday on Thanksgiving, but things had already slowed down at the docks for various reasons. “We are still seeing problems with dispatch of yard crane operators at the two ports,” said Steve Getzug, a spokesman for the Pacific Maritime Association, the group of terminal operators and shipping lines that employs the longshore workers.

Phillip Sanfield, spokesman for the Port of Los Angeles, said cargo congestion is still an ongoing problem. “We are working to do as much as we can to relieve the situation,” he said.

To add to the congestion woes, 13 shipping lines announced they would impose port-congestion fees of $1,000 per 40-foot container at West Coast ports.

Meanwhile, the ILWU and PMA continued to hold small subcommittee meetings to address port-by-port issues, but more-general meetings over larger issues were suspended for 12 days and scheduled to resume on Dec. 2.

One bit of good news is that as of Nov. 21, a handful of independent truck drivers who deliver and pick up cargo containers at the ports of Los Angeles and Long Beach stopped picketing truckers working for eight companies that serve the ports. It had added just one more problem in digging out cargo from the docks.

The truckers, hoping to be full-time employees at the companies, were supported by the Teamsters Union. Truckers, after an eight-day strike, returned to their jobs as talks are expected to take place between the trucking companies and the truckers.