Attendance Up at PV New York

NEW YORK—Première Vision New York reported an “all-time high” attendance during its July 21–22 run at Pier 92, where more than 300 exhibitors showcased their latest collections of fabric, trim and artwork.

“This is our 31st edition. We started in 2000,” said Guglielmo Olearo, Première Vision’s international exhibitions director. “The U.S. remains one of the key markets in the fashion industry.”

This was the second season at Pier 92 since the show moved from the Metropolitan Pavilion and Altman Building in New York’s Chelsea district last year, and Olearo said the show had already outgrown its space. In January, the show will move next door to the larger Pier 94 space, overlooking the Hudson River.

“It’s a great opportunity for us to introduce more innovation,” Olearo said, adding that organizers are considering possible new areas of expansion from denim to garment manufacturing to leather. “The idea is to complete the offering,” he said. “We see the market is in good shape, especially for luxury accessible brands like Michael Kors and Tory Burch. The dollar is stronger than it was, so the Eurozone is more attractive.”

“There are three kinds of people at the show—designers, fabric people and accessories people. To be all together has more of an impact on all of us,” she said. “We’ve been very busy all day.”

“As a group, we all complement each other,” Gallico said.

For many exhibitors, opening day of the show got off to a brisk start. That was the case for Sandrine Bernard, executive vice president of the New York office of the French lace mill Solstiss.

“We saw a lot of interesting people,” she said, adding that she had seen J. Crew, Jason Wu, Marc Jacobs, Zac Posen,Guess, Trina Turk and BCBG.

“Most of them have finished Spring and are starting Fall,” she said. “They are looking for inspiration.”

“It was crazy, especially this morning,” he said on the first day of the show.

At the booth for German mill KBC, Sales Manager Peter Voegtlin said designers and piece-goods buyers were looking for fabrics with texture and patternwork, including florals and vintage paisleys.

It was a tight fit at the booth for Laguna Beach, Calif., art studio Garreau Designs. A mix-up resulted in the longtime exhibitor showing out of a tiny space in the surface design section of Première Vision.

Owner Dianna Garreau was keeping an eye out for her accounts to make sure they didn’t miss her. Normally, her booth has space for many buyers to review the lines. This time, she only had two chairs.

“We lost a few people because of the booth space,” she said, adding, “The people who we’ve seen have pulled deep—it’s not onesies and twosies. Some of my California companies are here—for the first time, too. I tell my clients to come here if they need a broader perspective.”

This was the first time at Première Vision New York for Brazilian art studio Elaia.

“We’re looking for a bigger market in the U.S., said Elaia Director Bruno Hanson. “We’re happy with the results.”

Hanson said the exchange rate between Brazil and the U.S. makes his company’s prices very competitive. 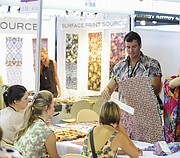