MADE IN LA: Chelsea Bell launched her Stone Fox Swim collection four years ago out of Santa Cruz, Calif., but moved to Redondo Beach to be closer to her swimwear factories in Los Angeles. 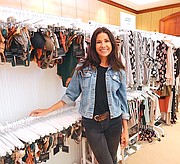 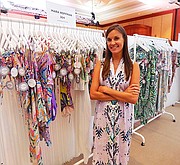 BEACH BLANKET: The Summer Somewhere Showroom had a colorful display at Cabana.

For the last two years, Cabana has been a popular trade show held in two big tents on the beach during Miami Swim Week. Buyers and vendors consistently raved about the well-curated collection of brands and the cool vibe that have kept exhibitors happy and buyers walking through the doors.

So when Cabana announced it would launch a West Coast version of its show in Newport Beach, Calif., there were several swimwear manufacturers and sales reps who decided to sign up for the inaugural launch.

Cabana West Coast took place Aug. 13–14 at the same time as Swim Collective, a larger swimwear show up the road in Huntington Beach.

Janet Wong, one of the show’s two organizers, said she and her business partner, Sam Ben-Avraham, decided to hold the show at the same time as Swim Collective so that buyers could take advantage of visiting both shows at the same time.

Cabana West Coast provided a free shuttle bus between its venue, the Balboa Bay Resort, and the Swim Collective location at theHyatt Regency Huntington Beach Resort and Spa, about a 15-minute drive up Pacific Coast Highway.

(Swim Collective held its first swimwear show at the Balboa Bay Resort in 2011.)

Cabana’s first show attracted a small group of brands that ranged from Mara Hoffman and Acacia Swimwear toBoys + Arrows and Norma Kamali. Wong said there were 38 booths that housed 27 brands, including swimwear, hats and accessories. At the Cabana show in Miami last July, there were 140 brands that exhibited.

The pace was slower the first day than the second. Chelsea Bell, owner and designer of Stone Fox Swim and Stone Fox Sweat, said she had seen six buyers by mid-afternoon the first day. They had all made appointments to see the 4-year-old line she had launched out of Santa Cruz, Calif. “There was a lot of buzz about the Miami show, and everybody was into it. Obviously, you have to listen to that,” she said. “So the fact that they were coming to the West Coast, it was a no-brainer to participate.”

Band of Martians, a showroom based in Newport Beach, had a double-wide booth showing Acacia Swimwear near the front of the big ballroom. Ally Lopez, the showroom’s co-owner, participates at Cabana in Miami. While there weren’t as many buyers at the Newport Beach show, Lopez was pleased with the first run of the event.

Megan Peters, an account executive for Mara Hoffman swimwear, said she had only seen a handful of buyers the first day, but most of her clients were planning to stop by the second day.

Cari French, a senior buyer with Revolve Clothing, attended the show with her assistant after stopping at Swim Collective.

She was at the Cabana show in Miami to buy Resort and was at the Newport Beach show to look at Spring 2016 collections. “There are a lot of lines we carry that are here,” French said, “and there are also new lines we’ve never heard about.”

One of the newer lines at the show was Boys + Arrows, a brand launched in 2011 by Meagan Howard from California’s Ventura County.

Sarah Ferguson, the brand’s sales manager and production coordinator, said she was at the show to boost the company’s presence on the West Coast while sales on the East Coast have been brisk. “We really believe in the Cabana show in Miami and wanted to be a part of it here,” she said. “We believe they will eventually be a destination show.”