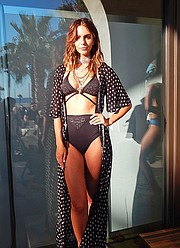 DESIGNER COLLABORATION: A look from the O’Neill collection done with designer Cynthia Vincent

REVIVED LINE: Nathan Chera shows off a top from the Anne Cole Locker label, brought back after a seven-year hiatus. 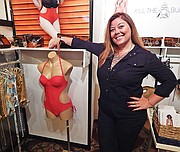 SHOES TO SWIM: Tara Burner used to be a shoe designer but now creates swimwear for her new line Kill the Buddha.

Swim Collective is just a few years old, but already it has grown to the size of the very popular SwimShow in Miami Beach, Fla.

Launched only four years ago as a biannual event, Swim Collective has grown from 50 exhibitors to five times that number and then some. “We now have the same amount of exhibitors as Miami’s SwimShow,” said the show’s founder and executive director, Shannon Leggett.

He noted that the most recent show, held Aug. 13–14 at the Hyatt Regency Huntington Beach Resort and Spa, had 280 exhibitors, compared with 240 last year.

Swim retailer Diane Biggs, who for decades has operated nearly 20 Diane’s Beachwear outposts in California and Arizona, was walking the show with a small knot of her buyers. They were in search of the next swimwear trend for 2016. “There is a lot of edge out there, and the suits are smaller,” Biggs said, holding up a pinkie finger to illustrate the barely-there silhouettes she has been seeing.

Biggs regularly attends both Swim Collective and the Miami SwimShow.

But there were swimwear buyers at Swim Collective who said they were skipping the Miami show in July and concentrating on labels found at Swim Collective. “This is really a major show for us,” said Anita Barreca, a buyer for Travel Traders, which buys for more than 150 resorts and hotels. “We can see all the lines in a consolidated space. All the vendors are here,” she said.

Even though Travel Traders is based in Miami, Barreca said the company skips the Miami SwimShow because it is the first show for the Resort season and manufacturers—taking into account their buyers’ initial reactions—tend to adjust their collections by the time they exhibit on the West Coast.

Barb Gaffney, vice president of Eileen’s of Tucson, is a regular at the show, where she buys for her family’s two stores, launched by her parents 42 years ago.

Gaffney tends to visit the same tried-and-true brands carried at the store, such as T.H.E. and Maxine, which are popular with the retailer’s misses customer. “This is closer than Miami. It is easier and less expensive,” said Gaffney, who planned to visit the Las Vegas trade shows to stock the stores’ sportswear merchandise.

A certain buzz was in the air as many booths were busy with buyers. A row of booths with a seaside view was set up for surf brands such as Roxy, Billabong, O’Neill and Volcom.

Manhattan Beachwear occupied a hefty amount of real estate in the middle of the Grand Room, the largest of the three ballrooms, packed with exhibitors. This was definitely the place to be because the action was nonstop for most exhibitors.

“We love this show,” said Alissa Mattei, vice president of sales, manufacturing and licensing for Raj Swim, which recently changed its name from Raj Manufacturing. The company is based in Tustin, Calif. “This show has been really good.”

But the two smaller exhibit spaces—the Huntington Room, reserved for higher-end brands, and the Mariners Room, which was located one level below the main exhibition center—were missing out on much of the action, exhibitors said.

“It is very quiet over here,” said Kerry Mahoney, senior account executive for Milly Cabana, a swimwear collection launched more than five years ago by Milly, a New York contemporary label started and designed by Michelle Smith. “I like what they’ve done with the room to give it a different feel, but they are not getting traffic to the room.”

Mahoney was referring to the layer of thin white carpeting that covered the floor, the serene view of the sandy beach outside and the zen-like music that played only in that room.

The lower-level Mariners Room was also not as active with buyer traffic. Tara Burner, who just launched her Kill the Buddha swimwear line for women who wear larger bra sizes, said she hadn’t seen that many buyers. “The energy level upstairs is much higher,” she observed.

Making appointments, however, was key. New swimwear line Swim Like a Mermaid, owned and designed by Sarah Fisk, had a buyer from the Directives West buying office stop by after being contacted by the swimwear line’s chief operating officer, Ann White, who grew up in the Los Angeles garment business.

“We felt this would be a good first show for us,” said Fox, who is based in Los Angeles. “We hope that’s true.”