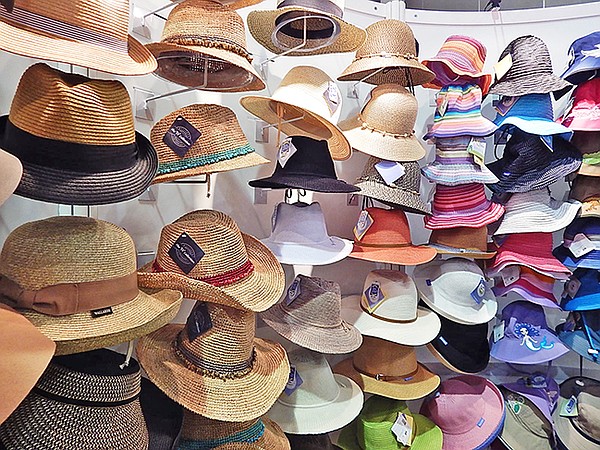 Curated Looks at Stitch, Accessories the Show and MRket VG

Food trucks and a large teepee in the middle of the exhibition floor gave the trio of shows organized by Business Journals Inc. a more contemporary and avant-garde feeling this year.

The three shows—Stitch for womenswear, MRket for menswear and Accessories the Show for accessories—were housed in one big ballroom at the Palazzo/Sands Expo.

The shows, held Aug. 17–19, had a light, airy feeling with wide aisles and lots of space to wander without feeling too closed in by cluttered booths.

This was the first Stitch show for Necessitees, a Los Angeles knitwear company known for its colorful T-shirts, dresses and jackets. In the past, the company has exhibited at WomensWear In Nevada, up the road at another hotel venue.

Necessitees is known for making its collection in Los Angeles and being able to deliver goods in four weeks while keeping its wholesale prices at $14 to $40.

This was the second time at the show for Edda Jockisch, the sales rep in the United States for the German label Elemente Clemente. By the second day, she had nine new orders, but most of those were from appointments she had made earlier.

She was not snagging as many new accounts as when she was at the last Stitch show in February, she said. The buyers she was seeing were going for novelty and color while watching their purse strings.

Elemente Clemente’s linen items were popular for Spring, with wholesale prices ranging from $50 to $250.

On the menswear side of the show, traffic seemed a bit more subdued, but exhibitors were pleased with the caliber of buyers they had seen.

This was the first time that Pelican Coast Clothing Co. from New Orleans was at MRket. The company, which sells mostly preppy shirts and other clothing, used to manufacture only neckties. But about two years ago it changed course.

“We didn’t know what to expect from the show, but we’ve been pleased with the turnout,” said Hunter Ford, director of sales. He said many of Pelican Coast’s competitors attend the show, so they felt it was natural to be there and would help the company achieve its goal of becoming a national brand.

Not far away, Age of Wisdom had a large booth near the front door of the exhibition hall. “Our customers always know where to find us,” said Heidi Hayes, a sales rep based out of Chicago.

Age of Wisdom has been attending the show for eight years—this year displaying its knit shirts made from polyester and Tencel that wholesale for $29.50. Also showing for Spring were plaid linen shirts at $44.50 wholesale. Both styles were popular with buyers.

On the Accessories The Show side of the ballroom, Wallaroo Hats, based in Boulder, Colo., was pleased with the buyer attendance. The company’s stylish chapeaux, designed in Australia and manufactured in China, have a UV protection of 50+. “We love the show,” said Lenya Shore, Wallaroo Hats’ co-owner. “You have buyers who are here to buy, and there are high-quality vendors with great accessories.”

One of those high-quality accessories vendors was Dat Tran, whose delicate silk scarf necklaces, cotton/linen/wool ponchos and wraps were beautifully displayed in a corner booth. They are hand-dyed in Vietnam.

Tran, who attended the Otis School of Art and Design in Los Angeles, has been designing these scarves under his Lua label for the past five years and consistently exhibits at Accessories The Show.

About 70 percent of his customers at the show are repeat buyers, and usually about 30 percent are new customers. But he felt traffic was down, not only at Accessories The Show but at all the more than 12 shows he exhibits at every year.

“It is challenging to get new people. The buyers are not coming as much [to all the shows],” he said.

He has noticed that buyers are keeping leaner inventories and still are very price conscious. Three years ago, he lowered his wholesale price points from $25 to $85 to $19 to $39.