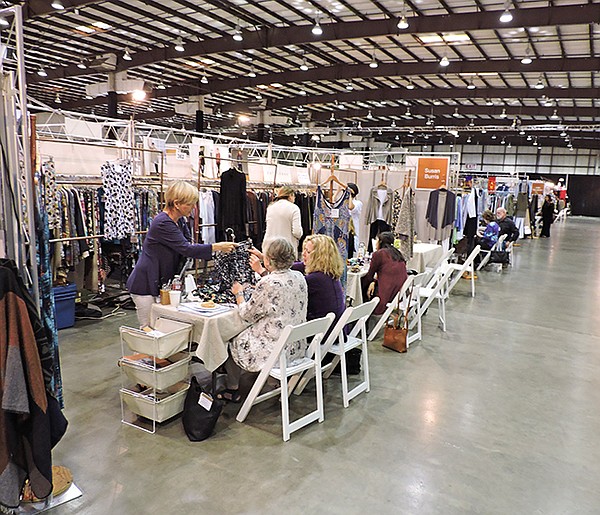 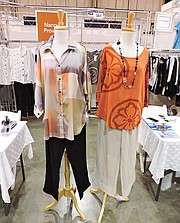 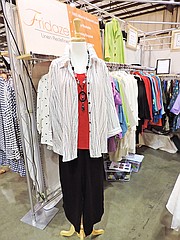 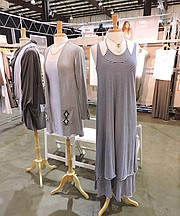 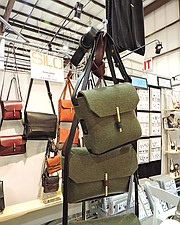 Silo handbags are made in Windsor, Calif., from European materials and handmade hardware.

SAN MATEO, CALIF.—For exhibitors—and some buyers—there wasn’t much time between the close of the trade shows in Las Vegas and the opening of Fashion Market Northern California on Aug. 22 at the San Mateo Event Center.

Steve Alpert, owner of Templeton, Calif.–based Alpert Associates, said when he called retailers to book appointments to meet in Las Vegas, he also asked if the buyers were planning to attend FMNC. He said he’s found “a meaningful number of stores that don’t attend Las Vegas twice a year.”

On opening day of the San Mateo show, Alpert said he opened two new stores, “which is one of the reasons I come to the show.”

“Smart retailers are taking a cautious approach, and that is probably healthy for our industry,” he said.

Sarah Kirakossian, a sales associate with Arlene Henry Sales in Los Angeles, said she sees little dent in the traffic at FMNC, even with the August show falling so soon after the Las Vegas trade shows.

“Vegas never affects this show,” she said. “These people are loyal. Even if they only come for one day, they always come.”

Opening day of the San Mateo show was “jammed,” Kirakossian said. “It was nonstop. I didn’t sit down until 4 p.m.”

“I was here from 7:30 a.m. to 6 o’clock last night,” she said, adding that her collections break their Spring lines at August market, so “August is always big for me.”

Harris said business has been good this year. “I’m 37 percent ahead of last year,” she said, adding that successful stores are “honing in on the brands that are retailing for them.”

“Everyone was very positive,” she said. “They didn’t want to leave.”

Nancy Provda had several appointments booked on the second day of the show, when FMNC stays open until 7 p.m.

San Rafael, Calif.–based Sheryl Draper was one of several representatives with accessories collections.

“Our show is about one-third accessories,” she said.

Many of Draper’s lines, including Pom and Silo, are made in California.

Windsor, Calif.–based Silo, which launched earlier this year, features felt and leather bags with handmade hardware and an innovative design that requires no stitching.

Early on the second day of FMNC, Draper said she had already opened new business at the show.

“We’re going into holiday season, and they have to make their stores special,” she said.

Part of the reason buyers came to FMNC so soon after the Las Vegas shows is the size and number of trade shows happening in Las Vegas.

“Because there are so many shows at once [in Las Vegas], it’s become very difficult for buyers to accomplish all they want to accomplish,” said Jacqueline Stone, a Fairfax, Calif.–based representative for Mycra Pac, Escape from Paris, Italca scarves and Pantropic Hats. She described the August FMNC as “very good and very encouraging.”

This was the second season at FMNC for Mike Berkis, brand director with Consolidated Shoe Co. The Lynchberg, Va.–based footwear company was one of a handful of exhibitors showing shoes at FMNC.

Berkis said the last show was productive enough to encourage him to return with three of the company’s footwear collections, Poetic License, Nicole and Madeline.

“I didn’t write a ton of business at the last show, but I wrote a lot of it,” he said. One retailer placed a small order at the last show and returned this time to buy nearly 20 styles.

“This show to me is about new customers,” he said. “Now I’m going to come to every one.”