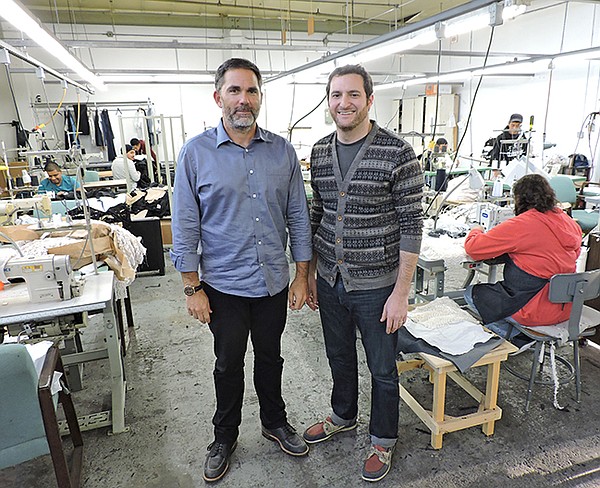 MANUFACTURING | MADE IN AMERICA

Security Sourcing: Made in LA and Under the Radar

“I’ve always been a supplier to brands,” Weitman said. “I understand the challenges because I’m doing it with them.”

Security Sourcing International Apparel operates as a modified full-package producer, Weitman said. Typically, clients provide their own fabric, but SSI Apparel handles everything else, including product development, patternmaking, cutting, sewing and quality control. SSI Apparel can provide operational support such as cost sheets and trim cards. Clients can hold their fittings at SSI and store their patterns and materials there, as well.

“They are almost leasing our staff,” Weitman said. “It’s hard for a designer to be really good at all facets of the industry. We can do all the things they were doing themselves, but we do it better—and we’re taking a burden off them so they can focus all their time on design and sales.”

When SSI Apparel first began, the focus was on producing T-shirts primarily for action-sports brands, but the division has grown to produce nearly every category of apparel, from woven shirts to contemporary dresses.

“We like to stay away from full-fashion sweaters. There are a few shops in town that do that really well,” said SSI Apparel President Jack Ribakoff. “And until recently, we didn’t do any five-pocket jeans. There are great five-pocket denim houses in town.”

With the addition of a seasoned denim developer, SSI Apparel has added small specialty denim programs to its list of services.

Ribakoff joined the company three years ago as a trainee and last year acquired a stake in the SSI Apparel business.

“It’s been a good balance,” Weitman said. “He brings a different set of eyes. He also gets the support of my base of knowledge.”

“Ashley and her sister needed first garments and product development,” Weitman said. “They were making sophisticated garments at a high price point. The Row is what turned us into a higher-end house.”

But eventually the Olsens moved the business to New York and hired their own production team, Weitman said, noting that that trajectory is typical. Young brands start out needing SSI Apparel’s services but eventually bring production in-house.

On the other end of the spectrum are the well-established manufacturers looking for a resource to handle manufacturing. That was the case with Levi Strauss & Co., which began producing woven shirts at SSI Apparel about two years ago, Weitman said.

“We’re an alternative for big brands that want to be part of the made-in-America story,” Ribakoff said.

Levi’s encouraged SSI Apparel to build out its facilities.

“That was always my vision,” Weitman said. “I knew eventually in order to continue to offer quality, fast delivery and the flexibility to do small quantities, I’d better have a factory.”

Today, the space in downtown Los Angeles employs about 10 sewing operators, a quality-control worker, patternmaker and development manager working alongside STC-QST’s staff. There are about 55 sewing machines, including several vintage machines that can produce certain specialty stitches.

“The shop is only as good as the people who operate the equipment,” Ribakoff said. “There’s a difference between a sample sewer and a production sewer. We try to hire sewers with sample experience.”

Weitman said he envisions a time when SSI Apparel employs about 30 operators but he’s not looking to build a massive sewing factory. Some of the work is done in-house, but for larger cuts, SSI Apparel will place production with outside contractors.

“We have the freedom to go to our contractor base when we don’t have capacity,” Weitman said.

In the early days of SSI Apparel, Weitman said, taking on clients was akin to gambling, with the company betting that a start-up brand would quickly grow from a small business making 150 pieces to a large company producing 1,000 pieces per style.

“You spend six months on product development,” he said. “What we do is too valuable and too expensive. Really, what we’re selling is our time—and we invest a lot in it.”

Although SSI Apparel works as a traditional vendor with clients that meet certain criteria, the company added a new pricing model to make the cost of its services more like an ongoing agency fee than a flat fee for contracting services.

“We charge them a monthly management fee—look at it as the overhead cost,” Weitman said. “When we go to cut production, they’re getting the true raw cost of goods sold.”

Weitman and Ribakoff declined to state the cost of the monthly fee, only explaining that it depends on the breadth of the line and the complexity of the styles.

“The single biggest issue is getting to a price point the customer is happy with,” Weitman said. Companies that typically produce offshore make up the difference in cost between import and domestic with speed to market, quality control and lower minimums.

“There are other ways to mitigate the challenges,” he said.

To date, SSI Apparel has primarily attracted new business through word of mouth. The company does have a website (www.ssiapparel.net), which lists some of its capabilities.

Weitman and Ribakoff describe their relationship with clients as more of a partnership or a “plug-in” for a company’s operating team.

“It requires a lot of dedication to have success with a clothing line,” Ribakoff said. “Seventy percent of design doesn’t make it to production. I get to see it from sketch to conception. When you see the star piece, it’s exciting. I get a kick when I know we made merchandise hanging in a store.”