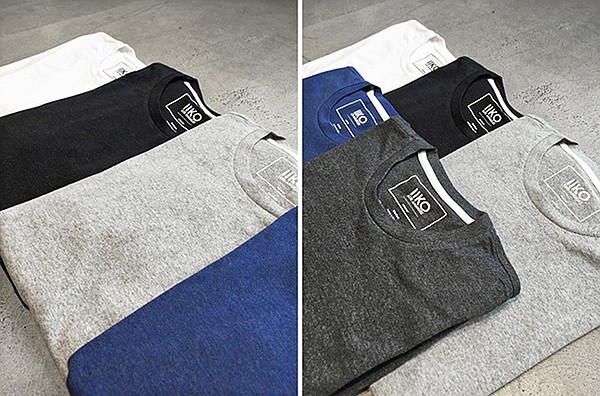 IIKO KICKSTART: MyDyer launched IIKO, a collection of T-shirts made from Recover, through a Kickstarter campaign.

Cotton for the Next Generation

MYDYER: When MyDyer moved to its current location in Long Beach, Dan Kang and his partners built the factory to strict environmental standards.

In the reception area in the MyDyer facility in Long Beach, Calif., there’s a sign noting how many kilowatt hours of energy the factory’s rooftop solar panels generate daily.

The sign also notes how much energy has been generated since the LEED Gold Standard–certified facility first opened 2½ years ago. Today, the location generates 150 percent of its energy needs.

It takes nearly 700 gallons of water to produce the average T-shirt when you factor in everything from growing the cotton to finishing the final product, said Dan Kang, one of the owners of MyDyer. “With Recover, it takes 10 gallons to produce,” he said, adding that the amount of water used for apparel production is one of the “dirty little secrets” of the garment industry.

“We love cotton,” Kang said. “Unfortunately, it’s not the most efficient fiber.”

It is material that would otherwise be thrown away or incinerated, Kang said.

In the heavier- gauge yarns, Recover also contains a percentage of recycled cotton made from used clothing that has been garnetted back to fiber, said Michael F. Spann Jr., who handles USA sales for Recover.

“New R&D to maximize the application of post-consumer textile waste is already in progress in collaboration with I:CO and H&M, which will bring about a whole new family of Recover yarn products in 2016,” said Isaac Nichelson, founder of the sustainable fashion consultancy Sustainable Source Studios and chief sustainability and marketing officer for Ferre’s Recover.

Recover yarns are currently featured in products by U.S. Blanks, American Apparel and Reformation. Abercrombie & Fitch, Hollister, Everlane and VF Corp. have included Recover in their products, as have Zara, H&M, Primark and Puma.

“With Recover, we get these beautiful mélanges that you’d have to pay extra to get,” Kang said. “For us, the idea that you don’t pay a premium for something recycled gives us a lot of opportunity.”

Today in the U.S., more than 85 percent of all garments will end up in a landfill or incinerator, Nichelson said. “Of the 15 percent that is recycled, most is for re-wear, which is awesome. However, more than half of that is shipped off to developing nations and disrupts local garment economies.”

Nichelson, who recently spoke at the International Fiber Recycling Symposium in San Francisco, said the goal is to see 10 percent of all apparel globally employing recycled fibers by 2020.

“With recycled cotton, the sky’s the limit because there’s so much raw material to divert from landfill and incineration,” he said.

According to Kang, there was a time when American businesspeople working in China were advised not to change their clothing every day because many Chinese people only owned one work shirt. All that has changed, Kang said. “We went from 1 billion people owning one shirt to them owning over seven shirts,” he said. “Do you know how much cotton consumption that is? And look at India. It’s happening there, too.”

As consumption grows, the industry looks for alternatives. “With 25 percent of all farmland devoted to cotton and millions of people starving in the world, we are are already beyond ‘Peak Cotton,’ and the current solutions the industry is looking toward are not sustainable,” Nichelson said. “What’s being [suggested] as a solution to the reality of peak cotton is just more synthetics.”

Oil-based fibers are the primary reason the textile and fashion industry is seen as the “second most destructive industry on earth, right behind petrochemicals,” Nichelson said. “That’s why mechanical recycling systems like Recover and emerging technology for chemical recycling of textile waste have to be optimized and expanded right now. We have simply been overlooking a massive amount of untapped resources for many years and rightfully calling it waste.”

Founded in 1914 as Hijos de Antonio Ferre S.A., the family-owned Ferre business originally started weaving to make bags for its fertilizer products, Nichelson said. The family started to make yarns and formed Hilaturas Ferre in 1947 as they began to recycle cotton in part due to the scarcity of raw materials in post-war Europe. Today the vertical operation produces yarns and woven fabrics.

Recover yarns are produced using a trade-secret process that generates longer-staple recycled cotton fiber and allows for fine count yarns up to 36/1s. “The focus is on turning what is normally perceived as waste into valuable resources,” Nichelson said. “Because Recover yarns are made from what was once considered waste, the cost is directly competitive with conventional cotton/poly.”

Hilaturas Ferre has an industrial complex consisting of three facilities in Banyeres de Mariola, Spain. The Ferre factory is certified by Aitex/Oeko-Tex, GRS (Global Recycle Standard), RCS (Recycled Content Standard), and labor is certified by Global Compact. Recover is tested monthly by Scientific Certification Systems to ensure all products are REACH-certified and are free of any harmful chemicals banned in the European Union.

The Spanish mill has also turned its eye to this hemisphere with plans to open a spinning mill in the U.S. in the future. Domestic Recover yarn production will allow U.S. companies to produce in Central America and bring goods into the country duty free through the Dominican Republic–Central America Free-Trade Agreement, Recover’s Spann said.

“We want a CAFTA-qualified product,” he said. “That’s critical.”

To get the word out about Recover, MyDyer recently launched a Kickstarter campaign for IIKO T-shirts made with a blend of Recover and recycled PET. MyDyer is hoping to raise at least $25,000 over the next 30 days. Entry-level backers will receive IIKO stickers and logo shirts. For mid-tier donations, backers will receive IIKO T-shirts. The shirts, available in unisex crew-neck and women’s V-neck styles, are made with no chemicals and no dyes. Available colors include white, gray, charcoal, navy and black. For $200 or more, backers get a T-shirt at a tour of the MyDyer facility.

Everything in the IIKO collection is manufactured in MyDyer’s facility in Long Beach. When the company moved from its previous facility in Paramount, Calif., Kang and his partners (James Lee, Joseph Choi, Krystal Kang and Jennifer Lee) chose to build the factory to strict environmental standards. They put in aluminum air lines rather than using copper. They installed LED lighting and removed all overhead power-supply lines.

“People said, ‘Are you crazy to put $1 million in solar panels on an apparel company?’” Kang said. Now that the company is producing more than it needs, it’s selling power back to the grid. “We think it was a great investment in the long run. We expected to pay it off in six years. [Less than 3 years later] we’re already half there.”