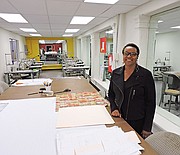 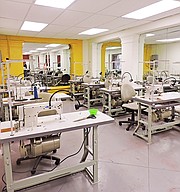 TRAINING CENTER: The Stitches Technology Designing for Success Academy is equipped with single-needle, overlock and coverstitch sewing machines; an industrial cutting table; and a classroom space, where students will learn the technical skills needed to land entry-level jobs in the garment industry.

Located in a two-room space at Los Angeles’ historic Hollywood Studio Club, home of the Hollywood YWCA, the Stitches Technology Designing for Success Academy is equipped with single-needle, overlock and coverstitch sewing machines, an industrial cutting table and a classroom space where students will learn the technical skills needed to land entry-level jobs in the garment industry.

“We’re training [sewing] operators, but I strongly believe that if they’re going to be paid $15 per hour, they have to be able to do more than sew to have a skill set to be of value to a company,” McAfee said.

Stitches recently wrapped up its first training program for trainers, winnowing down a field of 10 to two, who will help train future students in the program.

The core of Stitches’ program is technical training, but there is additional study in fashion history and textiles.

“I don’t think an operator can be effective if he or she doesn’t understand the history and the textiles,” she said.

There is also life-skills training such as nutrition counseling and self-esteem building.

“It’s a holistic approach,” McAfee said. “The concept is they won’t just be good for employers, they’ll be better for themselves.”

Students in the six-month course will meet four days per week, Monday through Thursday, from 9 a.m. to 3 p.m. In addition to skills training, students will have an opportunity to hear from guest lecturers to learn how the industry works. McAfee brought the first group to the Los Angeles International Textile Show earlier this year. Fridays will serve as an optional day, when students can take a yoga class at the center or have an opportunity to meet with prospective employers.

“I want to start those relationships now,” McAfee said.

The schedule was set to allow time for students who also have to hold down a job or want to attend college at night.

McAfee is working with the Hollywood WorkSource Center, which is recruiting potential students and conducting interviews. She envisions potential students as coming from two key groups. The first are those ages 18 to 30 who have graduated high school or have a GED (General Educational Development) Certificate but are not interested or ready for a two-year degree program.

McAfee hopes the program will fill the gap between the industry’s need for skilled, entry-level workers and young people in the region who are looking for work.

“For those who don’t have defined career goals or college aspirations, who dropped out of high school or are searching for a place to plant their roots and grow, the fashion and apparel industry offers opportunities,” McAfee said. “And it will give them a sense of purpose and accomplishment while providing a livable wage.”

Stitches will focus on sewing rather than design. Some of the students in the Stitches program may opt to move on to a two- or four-year program at local design schools such as Los Angeles Trade-Technical College or the Fashion Institute of Design & Merchandising. Others may focus on finding a sewing job immediately after completing the program. Some may want to start their own business at some point. And some may supplement the Stitches training with additional study as part of a career plan designed for them. For example, McAfee said, one student who started the program in August is looking to pick up additional training in costing at L.A. Trade-Tech.

In January, Stitches will begin recruiting the second key group of potential students—high school seniors—for a session scheduled to begin in August 2016.

“It’s very timely, but we have to prove ourselves to the industry,” she said. “They need to see us as a viable training mechanism—and they will. When [the students] leave me, they’re going to be not just good but great. They will have the skills as well as the attitude to be successful in any work environment we place them in. It is an opportunity for us, but it’s going to take time to build it. But anything great takes time.”

McAfee said she hopes to start placing students in permanent jobs by June.

From demo to implementation 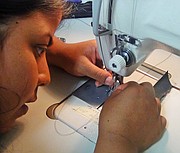 GETTING TECHNICAL: Students in Stitches’ six-month course will meet four days per week to learn technical sewing techniques as well as additional instruction in fashion history and textiles.

Funding for Stitches Technology comes from several sources, including a $50,000 grant from Chase Community Giving, the philanthropic arm of JPMorgan Chase; $5,000 from Wells Fargo; and in-kind donations from companies such as 9 to 5 Seating and IRS Demolition. Partners include the California Fashion Association, Juki America Inc., TC2, Southern California Edison, Karen Kane, CORT Furniture, Steveland Morris, the YWCA and Jan Perry, general manager of the city of Los Angeles’ Economic and Workforce Development Office.

This is McAfee’s second iteration of Stitches Technology. In 1998, she opened an 18,000-square-foot facility in South Los Angeles with a $500,000 federal demonstration grant and $1.5 million of in-kind support from the apparel industry thanks, in part, to a benefit headlined by Stevie Wonder. The South Los Angeles facility closed in 2002.

With the current funding, McAfee is implementing the new training program with a focused approach and plans to expand. Eventually, McAfee would like to see between 50 and 100 students pass through the program annually. She would like to add a social enterprise component to the program as well so students can also produce items such as canvas tote bags. Another plan is to offer recruiting and training services to manufacturers looking to expand their own sewing capabilities. And she’d like to add a dormitory or bring in a housing partner to help the students who need a place to live close to the center.

“Today, Stitches Technology has become much more relevant than it was back then due to the growing demand for garments produced in America and unreliable sources of workers to meet this demand,” said CFA President Ilse Metchek. “This will help the growth and development of the California apparel and textile industry."

McAfee likes to say design is her passion, but “Stitches is my mission.”

“That was critical to identify the population that is falling through the cracks. They need our help the most,” McAfee said.

McAfee said she helped advance Compton High’s program by bringing in industrial cutting tables and sewing machines so the students could work on the same equipment used in the apparel industry.

“Our industry is as significant as nursing,” McAfee said, adding that unlike nursing, there are few programs to bridge high school programs such as LAUSD and Compton’s ROP program with entry-level jobs in apparel.

“I believe that Stitches Designing for Success Academy will be that link,” McAfee said. “I’ve been a contractor and manufacturer. I’ve had the benefit of working in each area.This is an opportunity to pour everything I know into these students and this program.”