Fashion Market Northern California, the apparel and accessories trade show in San Mateo, Calif., typically draws retailers from across Northern California as well as a few from neighboring states. But during the show’s recent June 26–28 run at the San Mateo Event Center, exhibitors reported seeing buyers from as far away as Pennsylvania and Georgia.

“I opened up a couple of out-of-staters—like way out of state, not even Western,” said Gabriela Shultz, senior account executive for Rock Flower Paper, a print-driven apparel and accessories collection based in San Anselmo, Calif.

Shultz said she primarily saw buyers from better stores in Northern California, but she also met with retailers from Minnesota and Atlanta.

“I opened up new accounts and I saw some of my steadies,” she said, adding that this was the first time attending FMNC for the new out-of-state retailers she met with. 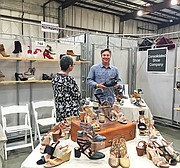 RETAIL MIX: Fashion Market Northern California exhibitors said they saw retailers from across the Pacific Northwest as well as some traveling from the Midwest and East Coast.

“I didn’t get as many Immediates as I usually do,” she said. “Everybody placed [orders] for Fall.”

This was the first time showing at FMNC for Connie Roberson, who has been producing the Connie Roberson collection in Marina del Rey, Calif., for 15 years.

Roberson described her collection as a better women’s line with a focus on fine fabrics such as Italian and Irish linen, silks and other natural fibers. Retail prices range from $188 to $420 and Roberson said a lot of her business is done at market in New York, Atlanta and Dallas.

At FMNC, Roberson was meeting with retailers from Western states, including Oregon, Seattle and Arizona.

“I already shipped some stores and they already reordered,” she said. “We’re a good Immediates line. We cut to order.”

Overall, Roberson said she liked the atmosphere of the show, which she said was less hectic than other trade shows.

“It was really easy to get around,” she said. “I’m coming back, for sure.”

“Five times a year,” she said. “Believe it or not, for 19 years I’ve only gone to the San Mateo [show] and before that when it was in San Francisco.”

NEW TO THE SHOW: Connie Roberson was among the new exhibitors showing at the recent Fashion Market Northern California show in San Mateo, Calif.

Campbell was at FMNC looking for Winter goods.

“I try to go in and be cautious, but I always find a couple of Immediates I can talk myself into,” she said.

She said she keeps an eye out for new lines, but “I have my tried-and-trues and I like to go back to them.”

Ute Wegmann, owner of the Ute Wegmann showroom in the California Market Center in Los Angeles and current FMNC president, said the show is a good destination for a retail base that comes from all over California and the Pacific Northwest, but at the June show she also saw some retailers traveling from beyond the western region.

“I worked with someone from Pennsylvania,” she said. “We saw some retailers checking us out for the very first time, including traditional gift retailers who hadn’t been to our venue before.” 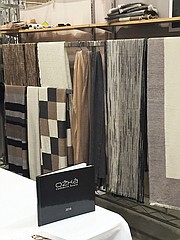 Retailers are expanding their merchandise mix to include more than just one category, she said. “Shoe stores don’t just carry shoes,” Wegmann pointed out.

“People are spending, they’re writing orders, [but] they’re being very specific and very selective,” she said. “They’re chasing business. Vendors that have stock on the shelf will get that business. Fortunately, every line we carry is family owned so we always have goods to ship. The days of the stores having sweaters on the floor in June are over.”

The next FMNC show is set for Aug. 21–23, but, at the larger show in October, Wegmann said, the show will add a business-to-business seminar for attendees.

On Sunday, Oct. 23, Paul Erickson, senior vice president for client services at RMSA retail solutions, will present a seminar titled “Inventory Is Your Retail Heart. Is It Healthy?”

The free seminar will be held at 8:30 a.m. (the show opens at 9 a.m.), and continental breakfast will be served.

“With the landscape changing for wholesalers and retailers with the onslaught of online, we need to be empowering our retailers to be the best they can be,” Wegmann said.