The marquis sign outside the Urban Outfitters store in downtown Los Angeles carries a curious message. It says: “There’s a Pikachu in my soup.”

Inside roams Pikachu as well as perhaps a Charizard. They are just two of the some 150 pocket monsters that populate the new Pokémon Go game, which in a short time has swept through a crowd of technologically savvy people who have downloaded the app.

Many retailers and shopping malls are discovering that this is a good way to draw in millennial consumers, who often are more prone to shop online than venture out to a standard store.

Pokémon Go is like a digital scavenger hunt where players, using augmented reality, take their smartphones and search for different monsters in different locations. Many of the Pokémon characters have been placed in historical places, art monuments and various locales throughout major cities.

Because the Urban Outfitters in downtown LA is located inside the historic Rialto Theatre, which opened in 1917, the store is a PokéStop, or a notable location. “It does attract people to come in,” said store manager Cheyenne Thompson, who said he has noticed a slight increase in store traffic ever since the app was launched on July 6. People wander through the store and also sit in the store’s back lounge seeking out Pokémon characters with their phones.

Cheyenne Thompson, the manager at the downtown Urban Outfitters store, is jumping on the Pokémon Go trend to bring shoppers in.

Thompson doesn’t know if the traffic is translating into an upswing in sales, but he is still “jumping on the bandwagon with the trend.”

The store manager, in his late 20s, is a connoisseur of Pokémon, having played it as a video game when it came out in 1996. He is familiar with all the monsters and how you collect them.

To attract more Pokémon Go players, the store staff is placing “lures” in front of the theater, which causes an influx of wild Pokémon characters to appear for a certain amount of time. Each lure costs around $1 and lasts 30 minutes. “I have been putting them out when we open in the morning, at around 3 p.m. and then closer to closing time,” said Faizal Alim, the men’s manager at the Urban Outfitters store. “It makes people want to come into the store and walk around, and, if anything, they may buy stuff. It is a good thing for us.”

Retail analysts and consultants have been talking up Pokémon Go as the next best new thing to get shoppers away from their computers and out into the real world of stores and malls.

Oliver Chen, retail analyst for Cowen and Co., a New York investment bank, said in a report that he thinks retailers should embrace Pokémon Go because it is an opportunity to use the mobile app to increase customer engagement and loyalty and drive higher foot traffic. “Pokémon Go has led to the first mass adoption of an augmented-reality application and, in our view, illustrates how AR could potentially play a more significant role in retail over time,” he wrote. 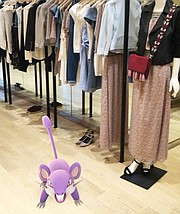 The Rebecca Minkoff outpost in New York posted on its Facebook page that there was a Rattata in its store.

He noted that Niantic Inc., the San Francisco software company that developed Pokémon Go with Nintendo Inc. andThe Pokémon Co., mentioned it might make it possible for retailers to pay money to become sponsored locations where players are motivated to stop by and pick up virtual rewards. The Pokémon Go app is free to download, which has helped its popularity among techies.

“We acknowledge that Pokémon Go’s long-term influence on the broader retail industry largely depends on how long the phenomenon endures and if other game makers can replicate similar AR technology,” Chen said.

Meanwhile, retailers and other businesses are having fun with this new technology and trying to use it to boost sales. Recently, the Rebecca Minkoff store in New York posted on its Facebook page that there was a Rattata, a ratlike Pokémon, in its SoHo store. If customers post a picture of the Pokémon character, tag it @rebeccaminkoff and show it to a salesperson, they can receive a 15 percent discount on merchandise.

In Los Angeles, Elton Keung is using that same tactic at his Boba 7 bubble tea café in downtown Los Angeles. Keung—at one time a world champion Pokémon card game player—said he has been placing lures outside the entrance to his outpost, which is a PokéStop along pedestrian-heavy Seventh Street. “Downtown Los Angeles is a hot spot to catch Pokémon characters,” said the recent graduate of the University of Southern California. 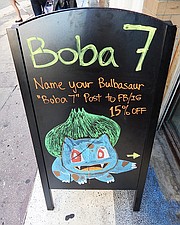 A sign outside the Boba 7 café in downtown Los Angeles attracts Pokémon Go players inside.

On his Boba 7 Facebook page, he notes that if customers catch a Pokémon at Boba 7 and post it on Facebook or Instagram, they can get a 25 percent discount on any drink during Pokémon Happy Hour.

“There has been a slight increase in sales but not a significant amount,” he said. “But it’s nice to see a lot of people with similar interests come in. It hits our target market, which is millennials.”

Shopping centers are trying to understand the Pokémon Go game and use it to their advantage. Maria Weber, director of corporate communications for Simon Property Group, said there are a lot of PokéStops at many of the company’s malls, which includes the enormous Del Amo Fashion Center in Torrance, Calif.

“We have promoted those stops through social media, but beyond that we are waiting to see what direction this will go,” she said. “The industry is in the air about it. They need to have metrics, and the metrics are not very robust. Everyone is waiting for the next move.”

Lyn Chin, a wholesale buyer for New York retail consulting and strategy firm Global Purchasing Companies, said the Pokémon Go app is for a certain age group, mostly people in their teens to their 30s. “It has certainly shined a light on a new way of marketing, and I think it can evolve into something else,” she said.

But she doesn’t believe that retailers can rely on it forever and it could go the way of the quick-response codes that never took off as a revolutionary marketing tool. “Remember when QR codes were the hot trend?” she asked. “It’s something fun and new for now, but everything has a lifecycle.”