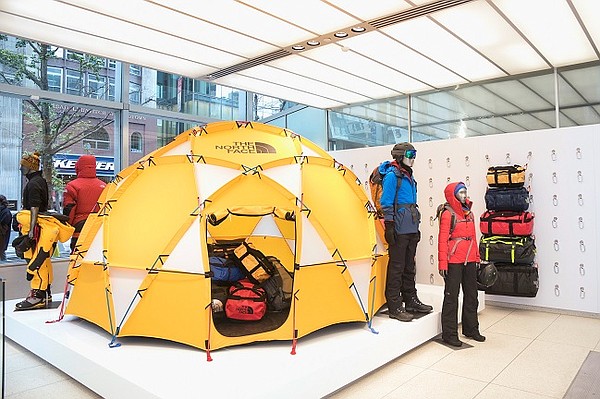 Hey, baby. It's cold outside. Or at least it's gonna be cold sometime soon in New York.

Just in time for the Big Apple's winter onslaught, The North Face opened a three-level flagship store at the corner of Fifth Avenue and 43rd Street in a spot subleased for eight years from ailing brand Joe Fresh. The 20,000-square-foot outpost at 510 Fifth Ave. is filled with camping gear, cold weather parkas, heavy boots, backpacks and everything outdoorsy.

This is The North Face's first flagship store in Manhattan and they have gone all out with a climbing wall and fancy dressing rooms modeled after The North Face Tent design. The dressing rooms, like the tents, are made of nylon and aluminum. Architects collaborated with the product-equipment team on the store design.

The flagship comes online just in time to celebrate the outdoor brand's 50th anniversary. It was launched in 1966 by Douglas Tompkins and his then-wife, Susie Tompkins. Two years later, it was acquired by Kenneth Klopp, known as Hap.

The first store was in the North Beach section of San Francisco. Today, the company is headquartered in Alameda, Calif., and it is a subsidiary of VF Corp.