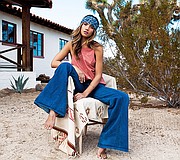 Former yoga instructors Vanessa and Ian Lopatin are teaching what they preach through yogawear.

In 2008, the husband-and-wife team founded Spiritual Gangster, and it has now become a favorite among yogis because of the label’s kitschy sayings and charitable donations.

Manufacturing and sourcing of fabrics is done domestically and overseas while the company is based in Irvine, Calif.

The Lopatins attribute the company’s growth to its social media and offline marketing strategies.

“The growth and success of the company stems from so many different things,” remarked a company spokesperson. “I would say one of the most interesting and exciting vehicles has been social media—primarily Instagram and Facebook—which have given us a very visual platform to inspire and tell our story.” 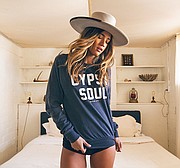 Additionally, the Spiritual Gangster lifestyle blog has been an integral part of growing their yogi community, covering topics that range from profiling prominent yogis to kombucha cocktail recipes, monthly horoscopes and new look-book items. The blog has been a project that has shown great success in social channels.

The company is also extremely active offline through its charity work and community outreach. For every item sold, Spiritual Gangster donates an undisclosed amount of its proceeds to provide meals to people in need by partnering with national and international charities such as Feeding America, The Cambodian Children’s Fund, Phoenix Children’s Hospital, Children’s First Academy and The Make a Wish Foundation. 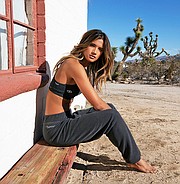 Spiritual Gangster’s marketing team is also active in lifestyle festivals such as Wanderlust 108, which is a 5-kilometer run, yoga and meditation event that prides itself as a “mindful triathlon of vibrant community, self-awareness and inner peace.”

At the festivals, the Spiritual Gangster team is very active on the ground and enjoys face-to-face time with customers. “Thus far, we’ve seen such an amazing response with Wanderlust 108, [which] is aligned with the brand and brings together everything we love—music, fashion and community,” a company spokesperson said.

Spiritual Gangster’s line of activewear offers tanks, tees, long-sleeve tops, jackets, hoodies, bottoms and accessories for men and women as well as children’s tees with sayings such as “Karma Made Me Do It.”

In the upcoming year, Spiritual Gangster is planning to introduce new categories and has upcoming collaborations in the works.

The company is also striving to continue its retail presence through online channels and bricks-and-mortar pop-up “experiences” for its customers.

On a larger scale, the team is working to expand internationally by creating retail experiences where customers around the globe can join the good-vibe tribe that is Spiritual Gangster.

The company also has an ecommerce platform set up through its own website.