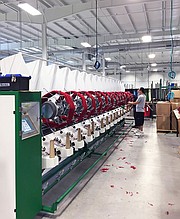 Saco River Dyehouse, a startup company formed in Biddeford, Maine, four years ago to dye yarn skeins for the home knitting industry, has moved into a new facility and has invested heavily in new equipment as it broadens into assorted technical textiles markets. While Saco River’s business will remain yarn dyeing, the new equipment will also allow the company to put coatings on yarn.

“It’s about diversifying,” managing director Claudia Raessler said. “We’re moving into technical and industrial markets. Our message is simple. If you have an uncolored thread or yarn, we want to put color on it.”

Raessler, who previously made her living as an attorney, bought the assets of a defunct dye house in 2012 with her husband, Ken, and a few partners. Most of the equipment was usable but relatively antiquated, so the new investment figures to take the company to a new level. It will greatly expand production capacity. 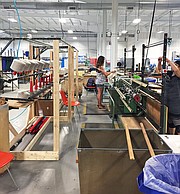 “We selected this machinery because Italy, during the economic downturn, maintained a very strong presence in research and development for textile machinery,” Raessler said. “They had to do it because Europe is the U.S. on steroids when it comes to environmental standards and learning to manufacture with less environmental impact. This machinery gets some of the best ratings, and that’s one of the things that is really important to us.”

It was a busy summer at Saco River. As the new machinery was arriving from Italy, the company moved into a larger, 25,000-square-foot facility. Saco River’s original home was in a portion of a historic factory formerly operated by now-defunct textile giant WestPoint Stevens.

Raessler said the new machinery will help her company reduce operating costs. Primarily it comes from reduced water usage, which has dropped from 40 gallons per pound of yarn to four gallons per pound.

“We can now be more flexible around our pricing structure,” she said.

All of this makes it more practical to produce textiles in the U.S. Raessler says it’s part of the company’s story and it’s a story that many customers want to hear. 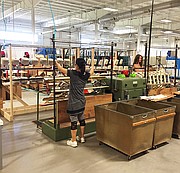 “Our challenge to manufacturing in the U.S. is to make it work economically,” she said. “We are a hell of a lot closer to that now with the new technology. Our old equipment came out of an old dyehouse in New York. We have to focus on what will make it work from a sustainability perspective.”

The company currently employs 18 people, and Raessler expects that figure to grow as the new capacity ramps up in the coming months. Production will grow from the current 8,000 to 10,000 pounds per month to 30,000 pounds per month by the end of the year. Saco River’s production staff, which numbers about 10, is mostly international.

Looking back on Saco River’s first four years, Raessler said her main takeaway is that there is no script to starting up a textile operation.

“We’ve gone through all the pains that a startup goes through,” she said. “There is no cookbook to consult. It just doesn’t exist. No matter who you are in an entrepreneurial setting, you have to listen to your team because they are the ones who are going to get you to the finish line—not me or my husband but the team.”

Saco River has forged partnerships and associations with companies around the U.S. One of those is San Francisco–based California Cloth Foundry, which Raessler describes as trying to remake the organic clothing industry. Saco River has done some design and color work for the firm and hopes to do much more. 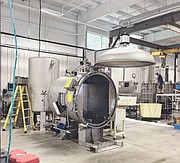 Many other recent startup textile and apparel firms have discovered a significant obstacle is finding skilled workers. That is true in Maine despite the state once being a major center of textile activity. Most of the major manufacturers closed during the first decade of the 2000s. Equally tough, especially in the Northeastern U.S., is finding industry-specific training programs. Raessler has had discussions with the local community-college system about developing a curriculum. Another option is online programs through the North Carolina State University College of Textiles.

Looking ahead, she sees two major challenges for the company.

“If you are in an ownership role, you set the tone for everybody. If I manage myself effectively, then I think everything falls into place. Understanding how to hire into the next phase is important, and right now we have a lot of employee needs such as sales, a computer programmer and a powerhouse kind of person for manufacturing. So, making the HR decisions is the second-biggest challenge.”