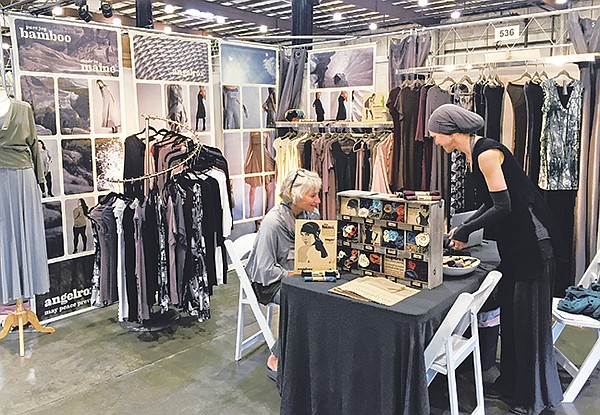 Amanda Crutcher and Roxi Suger in the Angelrox booth

The show, held April 23–25 at the San Mateo County Event Center, was completely sold out and was probably one of the largest shows in recent years, exhibitors said.

“I think the retailers are happy that the weather has changed, and it is sunny now and stopped raining,” said Sheryl Draper, an exhibitor based in San Rafael, Calif., who represents such labels as Aunts & Uncles, a belt and handbag label; Dub & Drino, a line of brightly colored tights and socks; and Pom Jewelry, made in Marin, Calif. “Attendees were doing a little bit of buying to freshen up things.” 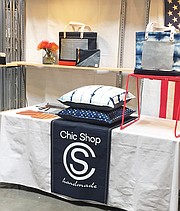 Fashion Market Northern California is an easy show for buyers to attend. The event center is close to the freeway, and the large, cavernous hall leaves enough space to create wide aisles between the rows of sales booths. In the afternoon, show organizers wandered through the aisles pushing a large cart filled with cookies and beverages as an afternoon treat.

On Monday night, there was a three-hour happy hour with two free drinks per person. And this year there was an educational tone to the show. On Monday evening, Mike Campion held a seminar on “How to Turn Your Store Into a Retail Magnet.”

Buyers at the show were mostly from Northern California, but there was a significant number of stores from the Pacific Northwest that find the five-times-a-year trade show has sales reps from all over California. Store owners from Alaska, Colorado and Arizona were also seen perusing booths.

Buyers were mostly placing orders for Fall, but a few sought out Immediates to fill in inventory. “Most people realized that for imported collections, they get only one shot per season to buy it because the importers are only bringing in a certain amount of goods at one time,” said Steve Alpert, who represents several lines such as misses line Cielo Blu, the sportswear line Daniel and the outerwear brand Tally Ho.

Alpert, who has been exhibiting at the show for years, said there is general softness in the apparel industry right now, but he was pleasantly surprised with the amount of business he wrote. “I did a comparison, and based on one year ago my business is up 15 to 18 percent,” he said.

Still, he noted that buyers were cautious in Northern California because of the dampened mood inclement weather had placed on people’s shopping habit. This last winter, 32.2 inches of rain fell on San Francisco, 10 inches above normal. “I wouldn’t say the buyers are depressed, but I have seen them more optimistic at other times,” he said.

In general, most exhibitors felt it was a good show and sales were up from last year. “We were solid for three days, and I felt pretty good,” said Julie Walls, an exhibitor from Santa Cruz, Calif., who represents such labels as Not Your Daughter’s Jeans, Kinross Cashmere and Nic + Zoe sweaters. “It’s a funny time, but I feel like this market is getting a lot of attendance from stores in the Northwest who want to see a good mix of brands,” she said.

Susan Burris, who represents Cut Loose, a casual line of clothing manufactured in San Francisco, and Salaam—a collection of tops, bottoms, skirts and dresses made in Vermont—said she got a lot of bigger orders than last year but retailers weren’t feeling they could splurge on inventory. “People did say they can’t wait for the weather to break,” said the sales rep, based in Bolinas, Calif. “They said business was better, and they expected that to continue.”

Julie Vandevert, whose JV & Associates showroom is located at the California Market Center in Los Angeles, left the show in a positive mood. “I know I sold more than last year,” said the exhibitor, who represents clothing lines such as Cubism, Heartstrings and Kleen Idea. “That’s good because I know people were coming off a hard spring with the rains. A lot of them were crying the blues a bit. But things are slowly starting to pick up for them.”