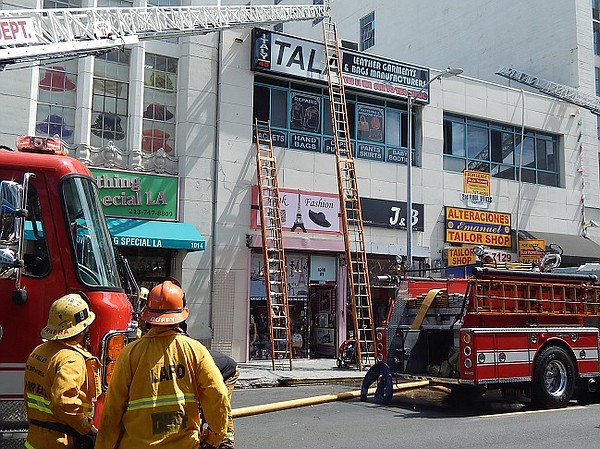 Fire in the LA Fashion District Near Santee Alley

Some 90 firefighters and 15 fire trucks and engines arrived in the Los Angeles Fashion District on Tuesday afternoon to knock out a blaze at 1018 S. Santee St. -- not far from Santee Alley and the California Market Center.

Parts of Olympic Boulevard and Santee Street were blocked off as ladders were extended to the second floor of a building that houses a tailor, leather manufacturer and accessories store.

Deputy Chief Phillip Fligiel said the Los Angeles Fire Department received a call at 2:20 p.m. that there was a fire in the attic and mezzanine area of the two-story building. Hand lines were deployed, enabling firefighters to put out the blaze in 34 minutes.

The street is a popular location for off-price stores and auxiliary companies to the apparel industry. On the top floor of the building was Tala Leather Garments & Bags Manufacturing. Pink Fashion, an accessories store, was nearby. Tailor shop Alteraciones Emanuel is also in the building.

The Fire Department is investigating the cause of the fire and the extent of the damage. Fligiel said arson is not suspected at this time.