Locklear’s parents started Emi-G Knitting in 1991, naming it after their two daughters, Gina and Emily. With the industry in a free-fall, there was little incentive for Locklear to join the family business following her college graduation.

“There’s wasn’t a job for me to come home to then, and we thought the business was going away,” Locklear recalls. “Anyway, I did a few other things, including getting into the real estate business. But it wasn’t what I was passionate about.”

Locklear still hoped one day to join the family business. During this time, she also gained an appreciation for all things organic. She started eating organic food and began to incorporate that philosophy into all aspects of her life. She believed she could produce socks made from organic cotton, brand them and be successful.

Locklear took her organic-sock concept to her parents, Terry and Regina Locklear, in 2008 and convinced them that was the future of the company. A year later, she created the Zkano brand and, three years after that, the Little River Sock Mill brand. Both use organic cotton and the socks are made through sustainable manufacturing processes. Zkano is sold primarily online while Little River is sold in specialty boutiques. Little River, named after nearby Little River Canyon, was selected as a 2015 American-Made Award Winner by Martha Stewart American Made, which honors American entrepreneurs.

“We literally started from the ground up,” Locklear said. “I knew how to make socks for other people, but I didn’t know how to make socks and sell them. There was a big learning curve. We had an extremely small budget and there were a whole lot of things that we just threw against the wall to see what stuck.”

The brands use organic cotton grown in Texas. Yarn comes from a spinner in North Carolina using low-impact dyes.

Locklear said she receives emails every day from customers expressing happiness about the company making socks in the U.S. A video on the company’s website helps tell the story of the company and Fort Payne’s sock-making heritage. She said that helps spread the excitement to a broader audience. She also notes that the greater Fort Payne area, which once was home to nearly 150 sock mills, now has fewer than 20.

Locklear said her biggest challenge is not unlike that of other small businesses. A small budget requires considerable creative thinking. Finding sufficient qualified labor has not been a major issue thus far, she said. Zkano and Little River operate lean, with just 15 employees, some of which float between Locklear’s sock operation and her parents’ greige-goods business, which produces athletic socks.

“We have been lucky with our labor situation,” Locklear said. “Our key has been our plant manager, who is also our head technician. He’s been with us since 1992 and I don’t know what we would do without him.”

The Zkano brand, comprised of colorful fashion socks for both men and women, reaches across different markets and is green- and organic-focused. Locklear said people who buy her socks like supporting U.S. manufacturing and are also intrigued by the use of organic cotton. The sustainability aspect is the “cherry on the top” of the operation. The Little River brand has primarily targeted women, but it launched a men’s line during the fall of 2016. 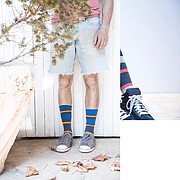 Socks are now trendy on fashion runways, Locklear said, which helps fuel her optimism. Men want to wear “crazy and bold” sock styles as a way to accessorize a basic look. She notes that her company has seen growth in men’s fashion socks.

So far, Locklear has been getting the company’s message out through the company’s website (www.emigknitting.com). She is passionate about the business.

“I love getting out there and telling people what we do,” she said. “2016 was a great year and we will keep growing. More and more people are buying our socks and they love them and our quality. I see that continuing to happen.”

Asked what she enjoys most about manufacturing socks, Locklear is quick to respond that it’s about carrying on the region’s manufacturing tradition. She’s motivated by the memory of seeing many of Fort Payne’s sock mills close in the early 2000s.

“I saw what it did to the community, friends of mine and my own family. This business has been a complete rollercoaster and we thought we would close numerous times,” she said. “People need to know about the importance of supporting U.S. manufacturing. We can tell our own personal story and the story of Fort Payne to bring awareness of this issue. I enjoy working with my parents and putting my own spin on what they started in 1991. That means a lot to me.”