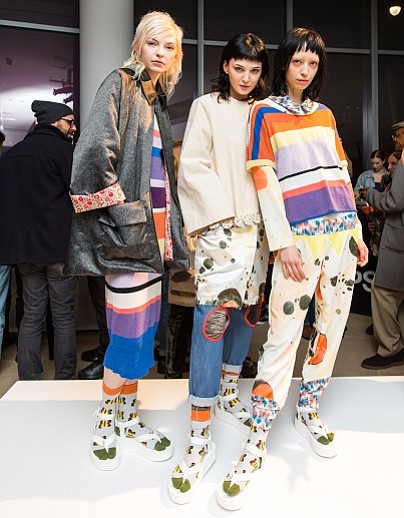 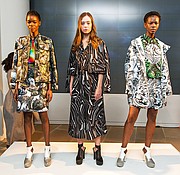 One featured designer was New York–based Lindsay Degen, who has created seven collections since she began designing in 2011, including knits for the Victoria’s Secret runway show in 2013.

Though a seasoned designer, Degen is new to the digital-printing world.

“This is my first digital print ever,” Degen said, motioning to a pair of jackets with matching floral prints.

Using Epson’s printing technologies, Degen was able to create prints that mimicked other techniques—including scans she created of quilts and knits.

Epson gave designers the opportunity to use digital dye-sublimation and direct-to-garment technologies in the design process, while Epson’s SureColor F-Series printer translated their designs to sublimation-printed fabric.

“The mystery is tricking the eye [about] what is a real print,” Degen said, adding that she was impressed with Epson’s printing quality. “I can scan very high DPI—and the color trueness was spot on. That was obviously great.”

Degen was also pleased she didn’t have to sacrifice sustainability through the process, planning out the fabrics so that the pattern pieces were next to each other.

“As a designer, I’m worried about the environment,” she said.

Textile engineer Mark A. Sunderland, who also serves as team director for Philadelphia University’s collection, also had their pieces featured at the show.

“Working with Epson was fabulous because they allowed us to use our textile knowledge using printing,” said Sunderland, adding that Philadelphia University has the largest digital printing facility of any university in the U.S.

“To see it come together like this—from the textile and fashion side—is truly inspirational,” Sunderland said. “I’m very excited for our student designers.”

One student designer on the team was senior Maria Balestino.

“It’s really exciting because this is the first time I’ve had an experience working with professional models and showing my work on such a large scale,” said Balestino, who eventually wants to be a patternmaker and potentially start her own line.

“I’ve learned a lot about technology and how to transfer prints into a real garment,” added senior Huyen Doan.

“Some of the fabrics we used were nontraditional and fused together,” said Balestino, pointing to a mesh jacket.“[Epson] pushed the boundaries on what we can print on.”

Other featured designers at the event were Alexandra Polo and Miguel Moyano from Ecuador, Carlos de Moya from the Dominican Republic, Daniel Barreria from Brazil, Daniela Hoehmann from Chile, Leonardo Mena from Mexico, Ricardo Pava from Colombia, Sarah Richards from the United States, Sarah Stevenson from Canada, Sonia Chang and Daniel del Barco from Costa Rica, Susan Wagner from Peru, and Venesa Krongold from Argentina.