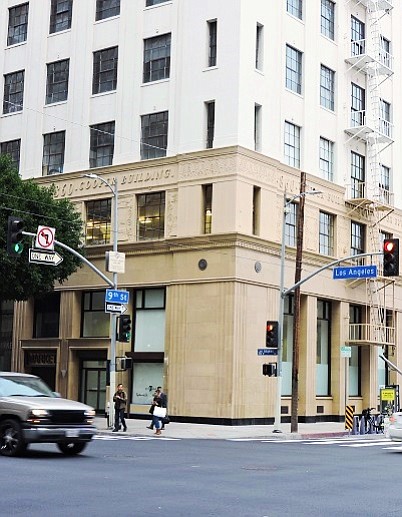 Leading the Los Angeles Fashion District in a New Era

Every day, seven tons of trash are collected in the Los Angeles Fashion District, up from six tons a day last year.

More trash on the streets is just one of the challenges that Rena Masten Leddy has had to encounter since becoming the new executive director last summer of the Los Angeles Fashion District Business Improvement District.

Other problems include the homeless who camp out on the streets and sidewalks every night and addressing crime in the district.

“Providing clean and safe services is 80 percent of our business,” said Leddy, who took over from Kent Smith, who stepped down as the executive director after heading up the BID for 17 years. When Smith first came on board, the district encompassed 56 blocks and had 300 business owners. Now it covers 100 blocks and has 1,000 business owners, who contribute funds for safety enforcement and clean-up crews as well as other services.

But as the district is transitioning into a hip area with 24-story apartment buildings replacing parking lots, artist lofts filling old garment manufacturing sites, and sophisticated restaurants and hotels moving in, the district is taking on a new feel that is shifting away from its fashion roots.

“There has been a lot of conversation around the vision for the next five, 10 and 20 years. How does the BID interact or help to create that new vision?” Leddy said.

Five years ago, no one would have thought there would be a high-end boutique hotel in the Fashion District. But the 2014 opening of the trendy Ace Hotel on Broadway in the historic United Artists Building led the way for others.

Soon to follow was the Tuck Hotel, a 14-room boutique hotel that opened late last year in a long-vacated building that once was a warehouse and brothel at 820 S. Spring St. in the heart of the Fashion District. Three new hotels are being built around 11th Street and Broadway: the Downtown LA Proper Hotel with 148 rooms at 1106 S. Broadway; the Hoxton Hotel with 164 rooms in the former Los Angeles Railway Building at 1060 S. Broadway; and a new 377-room hotel being developed by the Onni Group, which in 2016 purchased the 1920s-era Western Pacific Building at 1031 S. Broadway from Steve Needleman for $56 million.

The list of new apartment buildings going up is staggering as is the number of old structures getting a new lease on life and being converted into living spaces.

In 2015, the Fashion District had 2,000 residential units. By 2018, another 3,500 will be added, and by 2020 there will be some 7,500 units in the 100-block area called the Fashion District BID, which started in 1996 as the first business improvement district in Los Angeles. There are now more than 950 property owners in the BID, who pay fees to support the district’s annual $4.5 million budget.

Small, hip and independent stores are quickly popping up too. Everyone is flocking to Little Damage, a soft-serve ice cream store at 700 S. Spring St. that constantly changes its unique flavors and has been written up in TeenVogue, Glamour and Cosmopolitan. Pop Obscure Records at 735 S. Los Angeles St. is generating buzz for its collection of used records. And an art gallery is going up soon between Eighth and Ninth streets on Los Angeles street.

Reflecting the rise of the Fashion District, Los Angeles Street between Seventh Street and Olympic Boulevard is getting a $1.77 million streetscape makeover with 26 new trees, sidewalk improvements, curb bump-outs and lighting at bus stops.

As the demand for traditional showroom and retail space declines, the BID and its property owners will have to figure out how to fit in with the changes. “There is a lot of stuff on our plate besides clean and safe,” said Mark Chatoff, one of the founding members of the BID and president of the California Flower Mall.

That is one of the reasons Leddy was selected to lead the Fashion District BID. Over the past decades, she has worked on business improvement districts in Stamford, Conn.; New Haven, Conn.; and Portland, Maine; and worked as a BID consultant on projects that took her to Grand Rapids, Mich.; San Antonio, Texas; Sheboygan, Wis.; and Paia, Hawaii.

Marketing and event planning were some of her duties working with other BIDs. She organized a helium-balloon parade when she worked in Stamford. It is still being held every year right after Thanksgiving and is one of the largest helium-balloon parades in the United States.

When she worked in New Haven, a BID property owner who had converted a long-vacant building into housing had to put in a grocery store on the ground floor as part of the city’s approval process. “The developer went everywhere to recruit grocery stores with no success,” she said.

So she and the building owner created a food co-op that had the feel of a small Whole Foods market. “We created the board, the membership and watched it being built and got the people who were the vendors,” she said.

For the Los Angeles Fashion District, urban renewal is happening in waves. While most of the major urban renewal and changes have evolved on the western edge of the district, the grittier eastern side is slowly being transformed into a sleek urban mecca.

Where a centuries-old wholesale produce market once stood on San Pedro and 11th streets, there is now a bustling project called City Market South, where 8-year-old warehouse buildings have been transformed into cool spaces. Italian eatery Rossoblu just opened and The Slanted Door of San Francisco fame is another restaurant coming to the complex, which is being filled with bars, creative office spaces and an event location covering 2.5 acres. Another 10 acres is still being redeveloped. “It is a catalytic project for that area because it is so huge,” Leddy said.

Leddy was on the top of the list of finalists for the executive director job. She worked as the No. 2 person at the Fashion District BID as the managing director and had a feel for the district and its problems.

“She was trained under Kent and had a lot of experience with other BIDs around the country,” said Brad Luster, a Fashion District board member and president of Major Properties, which owns a few buildings in the Fashion District.

Others like the new perspective she has brought to the job. “She has brought fresh energy to the board and to the BID with new ideas,” said Chatoff of the California Flower Mall.

Leddy has been delegating more jobs to the board and organizing committees to tackle the various problems of homelessness and street vendors. “She is very forward looking for the district,” said Mark Levy, a BID board member and president of City Market South. “She sees a future vision.”