The Soulville band entertains the crowd.

National Jewish Health is a medical institution founded in Denver in 1899 by Frances Wisebart Jacobs, the “Mother of Charities,” as an institution for the needy.

The health institution did not send a bill to anyone until 1970 because fund-raising and charitable contributions covered its expenses. Today, National Jewish Health, which specializes in treating respiratory diseases, raises more than $30 million a year through dinners and other fund-raising events to cover medical research, costs and treatment. 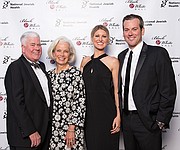 Last year, those honorees were Noel Ryan of Houlihan Lokey and Gail Bernstein of PNC Business Credit. This year, there were no honorees at the event, held at The Langham Huntington hotel in Pasadena, Calif.

But next year’s honorees were named. They are Sydnee Breuer, executive vice president and Western region manager for finance firm Rosenthal & Rosenthal, and Nick Rozansky, a partner in the law firm Brutzkus Gubner.

Robert Ezra, an attorney and partner with Freeman, Freeman & Smiley, a past honoree and the event’s cochair, told the well-dressed crowd that the facility is the only one in the world dedicated to groundbreaking medical research and treatment of patients with respiratory, cardiac and immune diseases. “It has been recognized as the No. 1 leading respiratory hospital in the country,” he said.

Susan Lerner, a trustee of the facility, told her family’s history of being treated at National Jewish Health. It started with her grandfather, who went to the hospital in 1929. “My maternal grandfather had contracted tuberculosis and was advised to go to the facility in Denver,” she said. “My mother told me she and her family would stand outside the tuberculosis ward and wave to him but they weren’t allowed to go in. National Jewish became his home and his fellow patients his family.”

She noted her grandfather’s care didn’t cost the family anything. Today, she, her four children and 12 grandchildren are all asthmatic and have serious allergies. “I even took my granddaughter there who has a peanut allergy,” she said. “As a trustee, I feel I am repaying the hospital for the care and kindness to my family.”

Dr. David Beuther, a pulmonologist and researcher for 13 years at National Jewish Health, noted that the group’s support helps the facility to care for patients and do groundbreaking medical research at the same time. His goal is to eliminate asthma in the next five years. 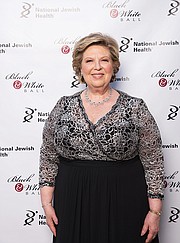