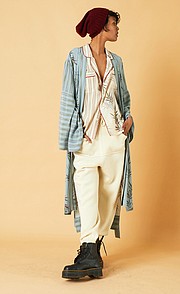 Her imprint was on everything from sweaters and blouses to cocktail dresses and work attire in a collection that had a unique concept of offering affordable contemporary clothes to a vast market of style-hungry consumers.

But, in 2017, with the company declaring bankruptcy, Azria left, following her husband, Max Azria, who in 1989 founded the company that expanded into 20 brands and a retail empire of more than 550 stores.

After leaving the company, Lubov Azria said she had a lot of time on her hands and spent months reexamining her career and what she wanted in life. “I just decided to find the beauty within. I took time to read every book I was going to read,” she said. “This brought me to a different understanding of life. I had been such a 9-to-5 person or better said an 8-in-the-morning to 10-at-night person. I was really trying to find that inner peace and essence and what my next chapter was going to be.”

That next chapter turned out to be a new luxury collection of silk pajamas, silk pajama–like tops for everyday wear, silk dresses, cashmere sweaters and ultra-soft denim pants whose name, La Bohème by Lubov Azria, reflected the bohemian lifestyle in Los Angeles that many people seek. 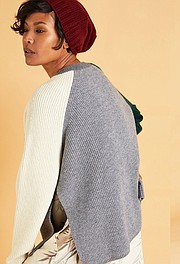 Looks from the latest collection

Most of these pieces fit in with the designer’s lifestyle. For the first three months away from BCBGMaxAzria, she spent a lot of time in bed. “I spent most of my time in pajamas. I discovered that nobody makes incredible pajamas unless they cost $2,000. And it is so simple,” she explained. “For at least the first nine months, I needed to feel comfort and I needed to feel stylish. I wanted to make my own rules and follow my own dreams. And that is what La Bohème is all about.”

Azria introduced the brand in March.

Launching a new label can be a difficult venture for anyone. Lubov Azria’s journey to creating a new fashion line was made more challenging by the death on May 6 of her husband from lung cancer.

But the designer is back in her studio, a large room at the nearly empty former BCBG­MaxAzria headquarters located inside a 176,000-square-foot structure in Vernon, Calif.

The feel of Azria’s studio, like her new line, has a bohemian vibe. There is an oversized beige linen couch and two large armchairs gathered around a hefty wooden coffee table in the center of the wide-open space.

Racks behind the furniture display the collection, which is heavy on silk pajama–like tops, flowy silk dresses, silk and denim jumpsuits, V-neck slipdresses made of silk charmeuse, tie-dyed cashmere sweaters, solid-color cashmere and wool sweaters, and denim and cotton-twill pants.

Jumpsuits can be worn loose for a more casual approach or cinched at the waist to be dressed up with high heels. “Versatility in clothes is very important to me,” Azria said, who was wearing a pair of distressed jeans, a pajama-like silk top and blue suede high heels.

Silhouettes tend to be flowy with sleeves that brush the knuckles and tops that are more boxy, a prevailing trend these days.

The line, whose retail prices range from $88 to $700, is being manufactured in a Chinese factory that is only making 24 pieces per style right now for what is being called a small niche collection.

La Bohème is being sold in two Los Angeles stores—Curve on North Robertson Boulevard in West Hollywood and The Piece Collective, owned by Azria’s stepdaughter Marine Azria and her husband, Leran Hadar. They have two locations—one on Abbot Kinney Boulevard and another on Beverly Glen Circle.

Florencia Garcia and Kun Kacibil cutting fabric and patterns in the sample room.

Nevena Borissova, the owner of Curve, said she was approached about carrying the line and loved it. “It has the south of France written all over it,” she said. “I think it is super beautiful, and the fabric is absolutely amazing.”

She believes the design is really well thought out, with a professional eye, and is a bohemian classic. “It is selling really well,” she noted.

La Bohème is being represented by the Brama Group in Milan, a fashion distributor with showrooms in Madrid, Paris, London, Berlin, Munich and Milan.

The collection, found at laboheme.com, has no showroom in the United States right now, but Azria and her staff are reviewing stores with whom they’d like to work.

Next month, the new label is planning to show at the Cabana trade show in Miami Beach, Fla., during Miami Swim Week, scheduled for July 11–16. The brand will be featured in the capsule section of the show featuring emerging brands.

A small niche collection is a far cry from the behemoth collection of clothing Lubov Azria designed when working with her husband at BCBGMaxAzria and the French label Hérvé Léger they acquired in 1998.

At one time, there were 1,400 employees inside the warehouse-like headquarters, and the collections were seen twice a year on the runway during New York Fashion Week.

Today, Azria has four people working on the label with her, including her oldest daughter, Chloe, who is 25.

Down the hall in a room filled with bright sunlight, sewing machines and a cutting table, three people work to create the patterns and designs sent to China.

When Azria isn’t working on her collection, she is helping to run the other companies started by her husband. One is Azria Home, which makes modular and prefab homes, including affordable housing and homeless shelters, and the other is ZappLight, which is an LED lightbulb that is also a bug zapper. It can be used inside the house or outide on the patio. ZappLight distributors include Home Depot, Walmart, Walgreens and Telebrands.

“My day is kind of sporadic,” the designer said. “My mornings are for doing designs and ideas and writing emails to China, and then in the afternoon I work on these other projects and then go home.”

Home right now is in the Los Angeles seaside suburb of Pacific Palisades, where Azria starts her day running on the beach and ends it by watching a beautiful sunset.