James Galanos prophesies the full-length patio dress for summer. The style shown here has a white linen bodice darted and seamed in the inimitable Galanos manner. 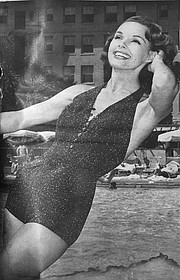 Downtown Los Angeles is slowly undergoing some very extensive alterations. By Aug. 18, at least eight major reconstruction jobs have been completed. Some buildings have been refaced; others have been torn down to give way to new buildings or parking lots. In mid-August, the city Parks and Recreation Commission signs a contract for the construction of a subterranean garage under Pershing Square—a project that has been sought for the past 25 years.

California’s growing economic strength is reflected in new retail projects such as one of the largest Sears stores in America being opened around the corner from Laurel Canyon and Victory boulevards in Los Angeles’ San Fernando Valley. “The two-story, 180,000-square-foot building will be run by a staff of 1,700 employees. It is estimated that the latest Sears retailing plant cost $400,000 to construct.” The emporium features a sprawling womenswear section “equipped with 21 dressing rooms, a large cafeteria, a roof garden and a conveyor-equipped receiving and marking room where merchandise is moved from deep inside delivery trucks on overhead tracks down into the hands of stock people.”

Business volume exceeding all expectations marks the area’s two big new stores—Robinson’s Beverly and May Co. Lakewood. Sales figures are not available, but overtaxed parking facilities and jam-packed mobs in the stores have made it impossible for store executives to deny that traffic has exceeded their highest hopes. Opening stock in the new May Co. operation is quoted at $5 million, while Robinson’s Beverly has a startling inventory believed to be at about $3 million. 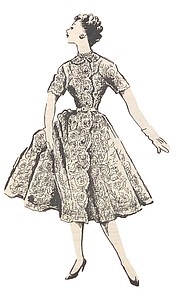 An accomplished dressmaker for the wealthy in United States society, Ann Lowe designs bridal-party dresses and a portrait-collar bridal gown comprising 50 yards of ivory silk taffeta for the anticipated nuptials of Jacqueline Bouvier and U.S. Senator John F. Kennedy. According to the National Museum of African American History & Culture, Lowe’s work was worn by clients including the Auchinclosses (Bouvier’s stepfamily), the DuPonts, the Rockefellers and the Roosevelts. As a pioneer in fashion history, Lowe is considered by many to have been the first African American designer to publicly gain a successful following.

California’s “cultured look in sportswear” is unanimously cited by the nation’s creative editors reviewing the market’s Cruise and Resort collections as guests of California Fashion Creators during press week. Esther Hotten, director of women’s activities for radio station WTMJ Milwaukee, is enthusiastic about the market on her first official press-week visit. “The market is more ‘self-confident,’ and there is ‘less bizarre and wiser use of color,’” she said.

Retailing’s Most Talked About Block

Taking its place among such celebrated “avenues of fashion” as Fifth Ave., the Rue de la Paix and Bond St. is a strip of Wilshire Boulevard in Beverly Hills spanned on the east by the Beverly Wilshire hotel and on the west by the new J.W. Robinson’s department store—a milestone in decentralized store planning—and the forthcoming Beverly Hilton hotel. One small block in particular can be said to epitomize the high-fashion gamut of the area, for on the stretch from Bedford to Roxbury can be found Jax, active “avant-garde” sportswear; Hansi, a casual-sportswear boutique; Mathews, sophisticated sportswear combined with simplicity in “after-five”; and Amelia Gray, the area’s better-dress salon. 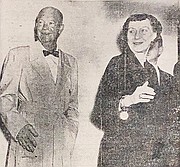 The President and Mrs. Eisenhower

Ike in a Robe From M. Jackman

California Apparel News publisher J.R. Osherenko covers a big coup for California designers. U.S. President Dwight Eisenhower wore outerwear made by California manufacturer M. Jackman. Osherenko wrote about how the 34th president of the United States got the Jackman piece. “It seems one of the President’s golfing companions in Atlanta has been a Jackman customer for years. When Eisenhower admired his Jackman clothes, his friend ordered some special golfing outfits made up for the President. After Jackman had delivered the golfing clothes, he felt it would be a nice gesture to present the President with one of his firm’s luxurious robes.”

Plans for the observance of Made-in-California Week April 15–21 move into their final stages with the signing by Gov. Goodwin J. Knight of his official recognition of the event. “California has gained international renown for the gracious, comfortable, convenient standard of living which we enjoy here,” Gov. Knight said. Gov. Knight further pointed out that the popularity of California-made goods in the trade marts of the world has been translated into “vitally important contributions to our economy.”

An infinite variety of fabrics, silhouettes and colors are represented in the new Catalina collection previewed by members of the brand’s sales organization at the 50th anniversary sales meeting at the Ambassador Hotel. Soft drapery often replaced the perennially popular shirred sheath, and many styles boasted a decidedly sarong effect. This flattering new sculpturing plus glimmering, glamorous fabrics are calculated to put a woman in a fashion world of her own, said Dick Figueroa, vice president and merchandise manager of Catalina.

Los Angeles designer James Galanos gains acclaim for designing gowns for Nancy Reagan, Jackie Kennedy and Grace Kelly. His design career started in Los Angeles in 1951, and he gained notoriety quickly. In 1959, he wins the Coty American Fashion Critics Hall of Fame Award. The 1959 honor marks the third time that Galanos had won the Coty Award; he also was honored in 1954 and 1956. The ceremony is held at a black-tie event in the fashion wing of the Metropolitan Museum of Art in New York City.

On Spring St., just below Seventh, the refacing of a large business and office building with the street level being readied for a retail outlet.

Amelia Gray store allures with a black, white, gilt and tweed background as a picture-frame complement to the ever-changing color-themed fashions. 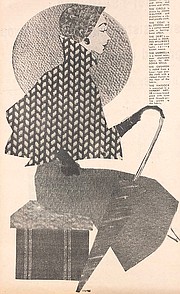 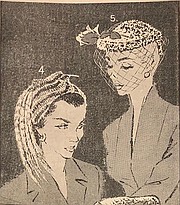 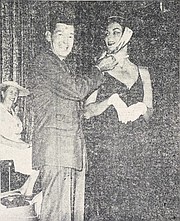 At the Fabric Futures Fashion Show, milliner Rex’s (with his model, Maruja) beautiful hats and his dexterity in handling them provided a stimulating interlude in the program.