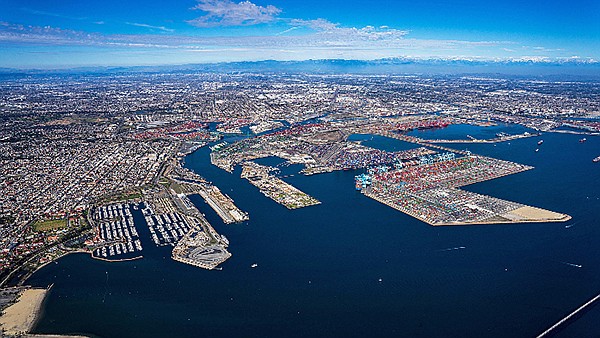 The Port of Los Angeles and the Port of Long Beach, which handle 40 percent of the country’s container imports, have been seeing an increasing number of shipments. These increases have caused shipping containers to pile up, but significant progress is being made at both ports in the backlog of container ships, offering promise to alleviate the current issues.

These supply-chain issues initially began during the summer of last year as consumers began to switch to purchasing consumer goods rather than services such as eating out, attending sporting events or going on vacation as COVID-19 lockdowns and stay-at-home orders prevented unnecessary travel and traditional social activities.

The demand for goods has not slowed and has put a strain on all aspects of the supply chain. Phillip Sanfield, director of media relations at the Port of Los Angeles, mentioned that the port is bringing in record amounts of cargo and will be moving about 10.8 million 20-foot equivalent units, 15 percent higher than any previous year. Before the backlog, containers for local delivery remained in terminals for four days while containers set for trains sat for less than two days.

A major factor in the progress being made at the ports was the announcement of a dwell fee that would be imposed for containers that sit for extensive amounts of time at the ports. The fees would charge for containers left on marine terminals for more than nine days. After this amount of time, a fine of $100 would be levied, with the cost increasing by $100 for every day thereafter that the containers continue to linger in the space.

The fine was initially announced by both the Port of Long Beach and the Port of Los Angeles in October, but the fine hasn’t been implemented yet as the start date continues to be pushed back. An announcement made by both ports on Nov. 29 noted that the container dwell fee is expected to be on hold until at least Dec. 6.

“While we have not actually started the fines, just the talk of the fines appears to have gotten the attention of the shipping lines and other stakeholders, which seems to have triggered an increase in fluidity in our container terminals,” Sanfield said. “Containers have been reduced by about one-third in the past month, which is right around the time we announced the possibility of a fine. We’ve kept holding off week to week as we’ve seen improvements.”

Supply-chain issues are affecting more than only consumers, who are having trouble finding certain items including products on holiday wish lists during the busiest shopping season of the year. Many retailers have also felt the effects of not being able to have product in stock and available for purchase.

Gap Inc. said that the supply-chain issues caused the company to lose $300 million in sales going into the holiday season due to not being able to get merchandise in stores on time. Gap Inc., which operates Gap as well as Old Navy, Banana Republic and Athleta, said it also expects to lose between $250 million and $350 million in sales in the fourth quarter due to the issues. Gap has worked toward avoiding holiday product delays by spending $350 million to air freight 35 percent of its holiday merchandise as well as send some inventory to ports on the East Coast to avoid the heavy congestion at the ports on the West Coast.

Sanfield said the port believes less cargo will be coming in as most holiday goods have arrived. Over the next month, the port will continue to work on whittling down the number of ships at anchor and processing the goods for the cargo owners.