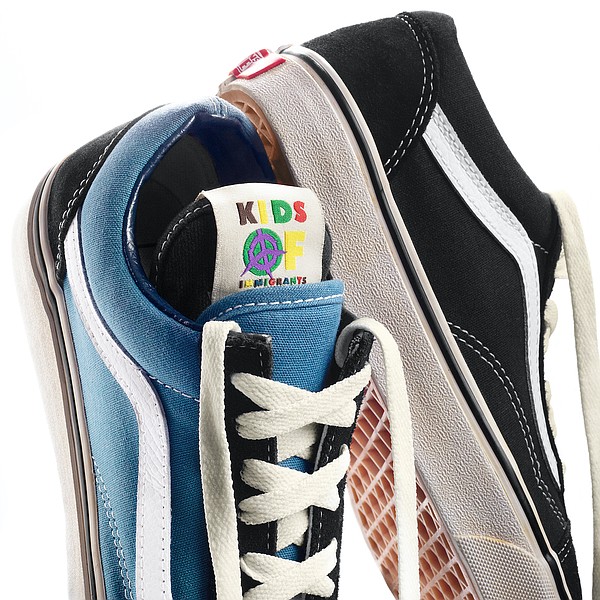 Kids of Immigrants celebrated its five-year anniversary by collaborating with Vans for a new shoe. Photo: Vans.

Kids of Immigrants is celebrating its five-year anniversary by releasing new footwear in collaboration with Vans and Greenhouse.

After previously partnering with the two companies for their footwear debut, which sold out in minutes, KOI launched a classic vibe. The shoe prominently features KOI’s messaging of “We Are All Cut From Different Fabrics But Together Make A Whole” and “Kids of Immigrants” is spelled out on the tongue. The shoe also pairs two classic old-school colorways in black and blue, and is styled with an aged sole, in addition to sail laces.

The first batch of the shoe was released on May 19 on the KOI website. The shoe, which retails for $120, is currently sold out. A second batch is scheduled to drop exclusively on the Greenhouse app on May 26. For more info visit the Greenhouse website.

According to a press release, the debut of the new shoe “honors the beautiful community that has nurtured and supported the brand resulting in a cult following and massive, national demand for the brand.”

With collections that sell out in just minutes, KOI amassed a following by focusing on social issues and the community. The brand has been praised by celebrities like Bad Bunny, Dua Lipa and Odell Beckham Jr.