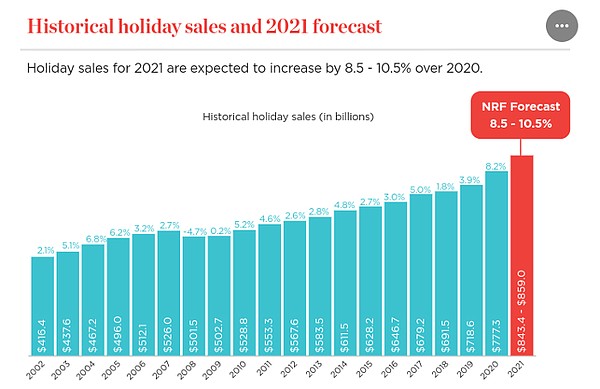 The National Retail Federation is the world’s largest retail trade association and is a leading voice in the industry for retailers and retail jobs. In a media call, Oct. 27, the NRF forecasted that holiday sales during November and December will grow between 8.5 percent and 10.5 percent over 2020, to between $834.3 billion and $859 billion. A separate analysis from Deloitte predicted holiday sales would increase somewhere between 7-9 percent over last year.

Like last year, consumers are prioritizing gifts for family and friends in addition to items related to holiday celebrations like food and decorations. Overall plans for holiday spending remain slightly below the pre-pandemic high as fewer consumers are planning to spend on non-gift purchases.

E-commerce sales are also expected to rise as more businesses have added purchase online and pickup in-store, curbside pickup and home delivery or same-day delivery options to help them get through the pandemic. The NRF expects that online and other non-store sales will increase between 11-15 percent to a total of $218.3 billion and $226.2 billion and mostly driven by online purchases, up from $196.7 billion in 2020. The numbers exclude car dealerships, gas stations and restaurants.

Last year showed growth in digital channels as many consumers turned to online commerce to meet their shopping needs. While online shopping is expected to remain high this year, households are also expected to shift back to in-store shopping and a more-traditional holiday experience. There is also expected to be an increase in international tourists for this holiday season as fully vaccinated individuals will be able to travel to the United States for this holiday season.

NRF Chief Economist Jack Kleinhenz said the strong growth in income and “stockpiled savings” should help spending overcome inflation that has been caused by consumer demand and supply-chain issues. The NRF says a savings buffer has been accumulated by consumers who have largely stayed home rather than going out to eat or traveling.

“There are several factors coming together to have a major impact on the holiday outlook, but household fundamentals are a bright spot in the uncertain present,” Kleinhenz said. “Consumers are in a very favorable position going into the last months of the year and are spending because they can.”

The NRF expects retailers will hire between 500,000 and 665,000 seasonal workers, up from the 486,000 seasonal hires in 2020. Some holiday hiring may have begun in October as many retailers encouraged early shopping to help avoid a lack of inventory and shipping delays. Almost half—49 percent—of all holiday shoppers said they planned to browse or begin shopping before November, up from 42 percent in 2020. Of those shopping before the holiday season began, 47 percent said they wanted to avoid the stress that comes with last-minute shopping, while 36 percent said they didn’t want to miss out on any key items.

The optimistic projections come as supply-chain issues continue to plague the U.S. and have caused some concerns for the upcoming holiday season. These challenges are expected to lead to fewer sales and discounts, longer shipping times and more out-of-stock items. Many larger retailers have announced early holiday sales events and are even giving rewards members first access to exclusive deals.

“Pandemic-related supply-chain disruptions have caused shortages of merchandise and most of this year’s inflationary pressure,” Kleinhenz said. “With the prospect of consumers seeking to shop early, inventories may be pulled down sooner and shortages may develop in the later weeks of the shopping season. However, if retailers can keep merchandise on the shelves and merchandise arrives before Christmas, it could be a stellar holiday sales season.”

NRF’s holiday forecast is based on economic modeling that considers indicators such as employment, wages, consumer confidence, disposable income, consumer credit and previous retail sales. Weather is another factor traditionally figured into holiday sales and the National Oceanic and Atmospheric Administration is predicting cooler, wetter weather in the north and drier weather in the south, which has previously correlated with stronger retail sales. The holiday season is defined by the NRF as Nov. 1 to Dec. 31.