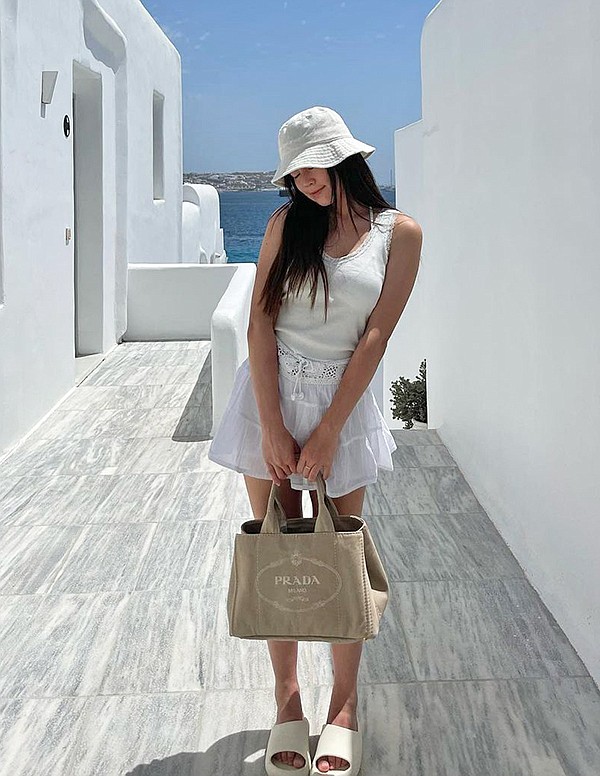 The Womenswear Trends That Defined 2022

As 2022 draws to a close, it’s valuable to take a step back and reflect on the major trends that emerged in womenswear. While there was certainly no shortage of inspiration this year, perhaps most interesting was how trends surfaced and flowed with ease between social-media channels, luxury designers and cultural elements. In addition to social-media aesthetics, which added fuel to both fashion and commercial styles, we also saw some distinct moments including exciting color, nostalgia, lingerie influences and the dominance of knitwear. Below we take a look at the factors that made each trend rise to prominence and ultimately define this year. 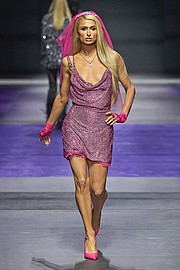 As forecasters, we love a good trend, and in 2022 there was no better platform for trends to emerge than on TikTok. It seemed as though a new trend or core aesthetic surfaced every other day with hashtags that enabled looks to really catch on. The thing about it is that in most cases, these aesthetics aren’t all that new—in fact, many are tied to nostalgia—however, with the right, clever name, aesthetics have the potential to go viral due to TikTok’s nature of reposting. And while content creators are responsible for coming up with catchy “cores,” brands and retailers stand to gain relevance by leveraging those hashtag aesthetics as they apply to their own merchandise.

While it would be impossible to identify every trending aesthetic, we do want to call attention to a few that rose to prominence. In many ways, #barbiecore was the aesthetic of the year. It’s something we’ve been tracking since 2020 when we first saw product leveraged as a mood booster in the midst of the pandemic. It progressed with the emergence of #barbiecore on social media and the concept of dopamine dressing that brought about the joy of dressing up, complete with energetic colors (more on that later). This year we also saw leaked photos of the upcoming “Barbie” movie and no other than Aught’s queen Paris Hilton walking the Versace runway in a glimmering pink dress. Of course, not every aesthetic has quite as much cultural currency.

A great example of how a particular aesthetic just needs a clever name is #coastalgrandmother, which emerged in the summer, consisting of a beachy wardrobe of timeless linen and sweaters tied around the neck. It wasn’t groundbreaking, but it was highly commercial and something that many brands outside of the Gen Z crowd latched onto.

And then there’s the #weirdgirlaesthetic, which has a lot going on from ’90s nostalgia to Harajuku-girl origins and attempts to reject the “core” classification of trends by mashing textures, crochet knits, bucket hats and kitschy accessories all together. Clearly there is no shortage of aesthetics that social media has given life to, but it must beg the question—if everything is cool, is anything really cool? 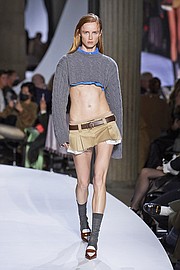 Speaking of viral trends, 2022 was the year when we entered a collective state of obsession over fashion items with the help of TikTok’s algorithm and the undeniable impact of celebrities and influencers who propelled trends well beyond the metaverse. Arguably the most attention-grabbing trend of the year, Miu Miu’s micro miniskirt,served up several major pop-culture moments, from celebrities on magazine covers to a stream of social-media videos featuring “dupes” that followed suit and even an Instagram account dedicated to the @miumiuset. Miuccia Prada really seems to have a pulse on what feels modern right now, as Prada’s ribbed white tank top adorned with the triangle logo is following a similar direction as we move into 2023.

Equally having a great year, Creative Director Glenn Martens was responsible for two other major viral items of the year—the Y2K belt skirt at Diesel (which had the internet debating for months over its price and practicality) and Y/Project’sbodycon dress with Gaultier’s trompe l’oeil body prints, now coopted by numerous fast-fashion brands.

But 2022 wasn’t just about luxury fashion and trends trickling down from the runways; this was the year when mainstream culture really shaped the “it” item of the season. Who doesn’t remember last spring’s frenzy over Zara’s pink slipdressand, most recently, Aritzia’s Melina leather pants, both of which have sold out countless times. With a constant appetite for newness and a desire to buy and wear now, it’s no surprise that #tiktokmademebuyit.

But while these fashion items captured the zeitgeist and defined the mood of 2022, it’s important to note that when it comes to the success of viral fashion trends, especially in the context of internet culture, there is an underlying common thread of consumers looking for a sense of belonging, resonating not only with a trendy item but also with the micro fashion communities that surround it. 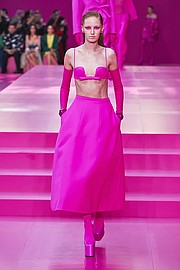 Pink was fashion’s favorite color of 2022. Everywhere you looked, there was an avalanche of products all covered in a shade that’s impossible to ignore. Valentino surely deserves credit for pink’s 2022 success when, back in March, Creative Director Pierpaolo Piccioli took a stand on the color and stripped down his Fall ’22 collection to one single hue: a custom, saturated fuchsia called “Pink PP.” From that point on, pink has been the moment. From red carpets and talk shows to seasonal assortments and pop-up stores, there is no escaping all-pink-everything. Throughout the year, pink took on different shades, like last summer’s hot pink and the return of bubblegum shades via the popular #barbiecore aesthetic. But this year’s pink dominance cannot be solely attributed to the color’s dramatic effect and memorable first impression. In a cultural context, pink has become deeply embedded in the collective psyche as a color synonymous with femininity, girlish innocence and the myth of the gentler sex. And in a moment brimming with women’s empowerment, pink has been reclaimed in all its campy glory, signifying much more than a must-have seasonal color. 2022 was the year when women deliberately chose to shine brighter, dress bolder, speak louder—all while dressing the part for the occasion. 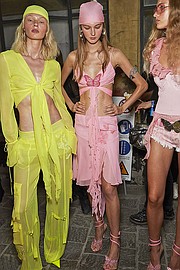 While#Y2K has certainly been propelled by social-media aesthetics, what sets it apart is its cultural significance coupled with the fact that even if you’re not a member of Gen Z you could easily buy into it. There is a lot of product to unpack here—all very commercial—from baby tees and the aforementioned pleated miniskirts to bustier tops and low-slung cargo pants.

From a fashion perspective, Blumarine leads the nostalgia aesthetic, inclusive of butterfly motifs and ruffled chiffon separates, which were introduced in the spring. But perhaps there is no better example of Y2K in the zeitgeist than the hit drama series “Euphoria,” in which the wardrobes of the characters champion expression with varying styles, from Jules’s schoolgirl looks and thrifted finds to Cassie’s take on playful femininity. What makes the show so compelling is that those of us well beyond our high-school years could still wear something like cat-eye makeup, Mary Janes or perhaps go a little more sexy than expected without a full-blown head-to-toe look. In that sense, today’s Y2K aesthetic pushes boundaries in an empowering way that crosses generations. 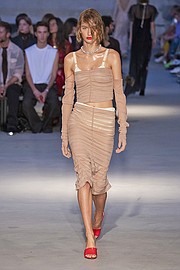 ​​If last year was all about sexy dressing for a mood boost amid a somewhat post-pandemic reality, 2022 saw the emergence of a different kind of skin exposure. Lingerie dressing became one of the most directional trends of the year, which we predict to fully solidify in 2023. Influenced by the success of bestselling items such as bra tops and corsets, designers have now expanded on the possibilities for the boudoir-inspired look, concealing and revealing bodies through sheer transparencies meant to reveal one’s most intimate layers. The “naked dress” made a return to the spotlight in fresh iterations on and off the runway, and bold displays of sexual freedom gave rise to a new era of the underwear-as-outerwear trend. In a post-Roe world when women’s bodily autonomy is being stripped away, statements of sartorial feminism are challenging outdated fashion norms, encouraging women to make a bold proclamation of feminine flamboyance. 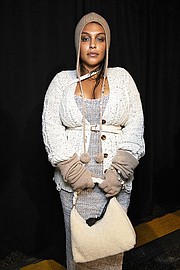 The Rise of Knitwear

With so many trends this year giving statement, made-you-look vibes, it’s almost hard to believe that just a couple of years ago in lockdown, sweats were the collective wardrobe of the world. While we’ve progressed significantly since then, there’s still this notion of comfort that persists and has graduated into the dominance of knitwear. We’ve seen this evolve from cozy bed-to-street loungewear ribbed sets to kitschy sweater vests for layering, knit dresses and, most recently, knit skirt sets. It’s a pivotal point that indicates consumers are still craving comfort in everyday life. At the same time, the addition of knit skirts or column knit dresses nods to consumers yearning to dress up a bit more, especially set to slim silhouettes that accentuate the body. For further proof of knitwear’s influence, look no further than cutout sweaters, which prove that it’s possible to be both comfortable and sexy at the same time.

In essence, 2022 gave us Fashion with a capital F. The year marked a triumphant return to playful escapism with buzzy aesthetics packed with cultural clout and a variety of key items and colors that refreshed pandemic-era wardrobes. And with so many options to choose from, this year in trend defined our collective desire to feel empowered by dressing up for maximum self-expression and sharing it far and wide across social media along the way.

About Fashion Snoops: FS is a global trend forecasting agency helping leading consumer-facing brands around the world unlock innovation and propel growth. Through a combination of human and artificial intelligence, we analyze cultural shifts and interpret detected patterns in order to surface trend-driven business opportunities. Learn more at www.fashionsnoops.com