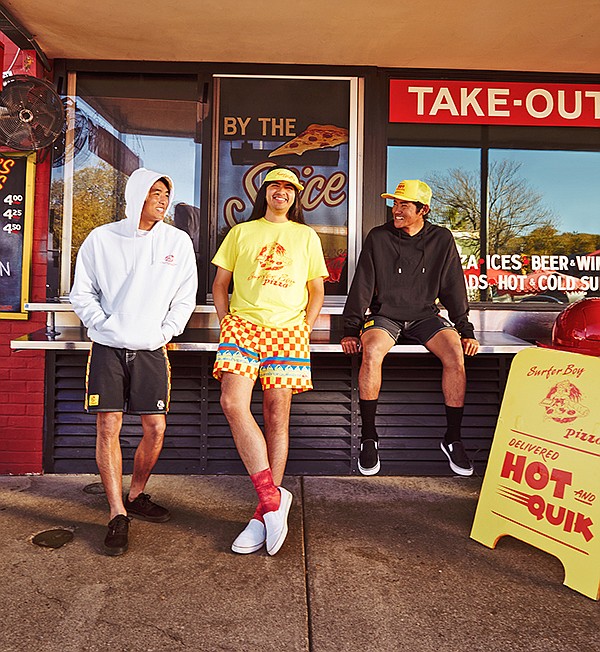 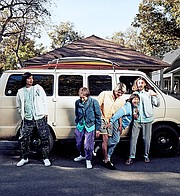 If you were lucky enough to have lived through the last great decade to be a teenager—the ’80s, of course—then you surely remember the colors. Everyone was pretty in pink—preppies in their pink polos and punks in acid pink. And surfers and skateboarders were notorious for their pastels, from their lavender tees down to their turquoise Converse.

But think a little harder and you’ll remember the dark side of the ’80s—gothic bands like The Cure, The Cult and The Misfits and singers like Siouxsie and the Banshees, Pat Benatar and Joan Jett, whose backup band was known, fittingly, as The Blackhearts.

This contrast between bright and dark is a key theme in “Stranger Things,” the hit Netflix sci-fi horror drama set in a small town in Indiana. The time is the ’80s, and when it came to costuming the young cast designer Amy Parris approached a brand synonymous with the surf-skate side of the era: Quiksilver.

A tour of the brand’s archives at its Huntington Beach headquarters led to a key partnership, and the Quiksilver x Stranger Things collab was incubated. “Quiksilver was an integral part of California fashion in the 1980s,” said Parris. “The show is so true to the period that it only made sense to infuse Quiksilver archive pieces throughout the show. I hope the clothes will resonate with a younger audience who is inspired by the fashions back then and be a friendly reminder to the stylish viewers who followed fashion in the ’80s.”

COVID slowed down the development process for two years, but with the premiere of volume two of season four on July 1, Quiksilver has begun releasing multiple capsule collections at pop-ups around the world, as well as at quiksilver.com, with a carefully curated selection of looks that are a nostalgic throwback to the brand’s surf-inspired ’80s looks and that integrate elements from the “Stranger Things” storyline. Netflix is the world’s leading streaming service, with 222 million paid memberships in over 190 countries.

The collaboration began three years ago with a vintage capsule collection that was greeted with an exceptional response, said Product Director Andrew Henry. What ensued was a partnership at the highest level Quiksilver has ever been a part of, with the company signing nondisclosure agreements and receiving advance copies of scripts—rare in Hollywood for a wardrobe contractor. “I was a massive fan of the show even before the collaboration,” said Henry, “so the whole experience has been amazing. Designing in Europe, flying out to fit the cast and then having items made in Turkey—all while the pandemic was disrupting travel and everything else.”

The contrast between an exciting creative collaboration playing out against the backdrop of the pandemic mirrors the show’s dichotomy of light and dark as characters clad in bright, optimistic fashions encounter paranormal forces. “Those who weren’t there—or those who were and can be reminded—respond to the bright colors and prints that typify the era,” said Henry, specifically referencing the peak pastel years of ’86–’87. “Girls are enjoying the lilac and sky blue but also gravitate to the black shades of the era at the same time. ‘Melancholy’ is the word I’m tempted to use—the dark underside of California style. There was a mix of culture at the time, and that’s definitely what we’re trying to do with the collection.

“It’s also been exciting to revisit the time when Quiksilver was the most prominent surf brand,” Henry added, “but with the right sort of attitude and relevance. I think it’s given us a new audience. The response we’ve had across the world has been exceptional. It’s also really cool to see surfers lapping it up, especially as surfing has gone through a lot of corporate BS since back then.”

“Quiksilver and I worked meticulously to make sure the fit, fabric and feel of each garment was both true to the period and akin to the characters’ closets,” said Parris. “What we achieved for a TV timeline was impressive, and it’s exciting to get to share the garments with the audience. This collection can easily walk off the screen and into fans’ closets. Viewers and fashion followers alike will appreciate the attention to detail and accurate period designs that are making a comeback in contemporary fashion.”