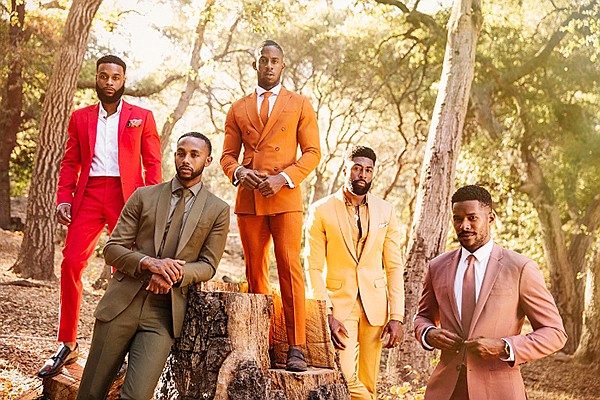 Grayscale offers bold colors, great fabrics and textures, and eye-popping patterns that afford its wearers the opportunity to stand out among traditional suit styles. | Photo courtesy of Grayscale

As men begin to rediscover experimenting with patterns, colors and fits of suits, consumers are continually looking for pieces that help them stand out. With bold colors and eye-popping patterns, Grayscale offers an alternative way to dress up and make a statement.

Founded in 2014, Grayscale founder and creative director BJ Gray initially set out to design bow ties. While working as a banker in Washington, D.C., Gray became known for his style and fashion sense, and many of his clients would often ask how he put his outfits together, which led to him eventually putting together the closets of his clients. Wanting more than the standard blacks and blues traditionally found in D.C. clothing stores, Gray decided the best way to get pieces that he couldn’t find was to make them himself.

After leaving his banking job, Gray moved to Paris, where he studied fashion design. Gray then moved to Los Angeles and began working as a stylist’s assistant while working on his brand and was able to bring his pieces in for fittings, which gave him the opportunity to receive live feedback on his pieces. In 2017, Gray launched his first collection of seven pieces and received a great response, ending his stylist’s assistant days and allowing him to become a full-fledged designer.

Gray said he draws inspiration from life and is always tinkering with his pieces so they relate to consumer needs. For example, he included an elastic waistband on suit-style pants to help men transition from work-from-home dress back to office attire. He also draws influence from his previous profession and loves to use math to create his suit designs, creating pieces such as the Pythagorean and the Line It Up suits.

“Going back to my original profession within banking, I add so much math into a lot of the things I do. I’m big when it comes to symmetry and making sure things line up,” Gray said. “Having a suit be able to function and have a line that goes from the top of the jacket to the bottom of the pant and still be lined up is not the easiest. I love challenging myself and my tailors, who probably hate me, because I push the envelope on what a normal suit could be.”

Gray noted colors are a big trend in suits, and a new openness in fashion toward untraditional color schemes and fits allows Grayscale to create pieces that feature the geometric prints and other patterns that make the brand stand out. He also mentioned that the trends of high-waist fits and bell-bottoms are coming back as people want to be more comfortable now while dressing up.

“This is a time when we have no lines anymore as to what masculinity looks like. Maybe even 10 years ago, seeing a man wear a hot-pink suit would be seen as a faux pas,” Gray said. “Now, it doesn’t matter who it is. You’re going to see colors and it doesn’t have any inclination as to who that person is or what their life is and it shouldn’t! Fashion is an expression of your inward self. I always love the pieces that show who you are without saying a word.”

Grayscale also has a women’s collection, which Gray said is still being worked on and refined. Offerings on the website also include unisex options. Currently Gray only sells via e-commerce but has hopes of one day selling the brand in stores.

Gray also mentioned an upcoming Grayscale fashion show slated for late March in Los Angeles that will display a new collection. He didn’t want to reveal too much information but claimed the event will be a show-stopper.