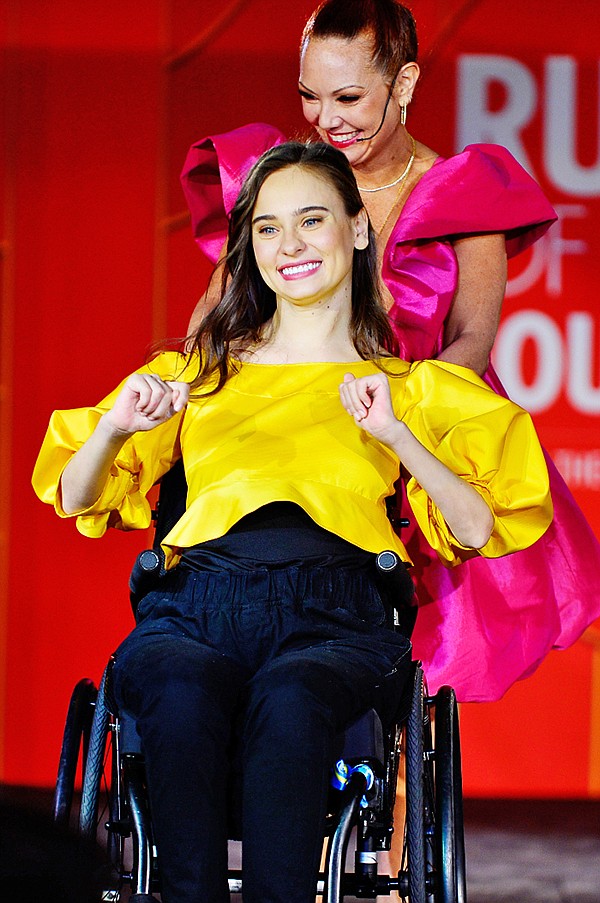 Runway of Dreams hosted A Fashion Revolution, focused on the latest in adaptive fashions. Adaptive fashion is everyday clothing made for people with disabilities and includes features such as modified closures made with magnets or snaps and slip-on shoes that tighten with Velcro as opposed to laces. | Photos by Jerod Harris / Getty Images

Runway of Dreams was founded in 2013 by Mindy Scheier, a fashion designer by trade and mother to a son with muscular dystrophy. Scheier feels there is no better way to change the mindset of the fashion industry than on the runway.

Adaptive fashion includes everyday pieces of clothing that can be worn by anyone but include such features as modified closures made with magnets or snaps rather than zippers and buttons, which require more dexterity, and shoes with more space under the tongue to make them easier to get on or removing laces altogether in favor of slip-ons with Velcro straps.

Hosted by actress and activist Jamie Chung, A Fashion Revolution featured over 70 models of varying backgrounds, ages and disabilities modeling adaptive clothing from a mix of mainstream and up-and-coming brands in the adaptive space, including the presenting sponsor of the event, Kohl’s, as well as Target, Zappos.com, JCPenney, Tommy Hilfiger Adaptive, Stride Rite, No Limbits, Wyatt Wear, Minor Details and befree.

Even with the push for inclusivity in fashion, people with disabilities and adaptive fashion have been marginalized among the rise in body-positivity movements and calls for more diversity in the industry.

“Driving awareness is the main reason we have events like this—to show that people with disabilities is the largest minority on our planet that people seem to forget,” Scheier said. “Being able to have something so big and so splashy really does change the perspective that disability should and must be included when talking about inclusivity.”

Taking part in the show was model Danny J. Gomez, a wheelchair user who mentioned that the term “adaptive clothing” is universal for everyone who wears clothes because if something doesn’t fit quite right then it can be “adapted” to fit properly. He said an event like the Runway of Dreams show reminds people that fashion should be inclusive for everyone because everyone wants to look good.

TaMyah Jordan, who is visually impaired, walked the runway modeling jeans, a top and a pair of high-heel wedges from Target. Jordan, who mentioned she dances and competes in track and field and cheerleading, said she was happy to be a part of the event because it helps shift the idea of what people with disabilities can and cannot do.

“It’s very important to me to be a part of this because I’m always being questioned as to how I do what I do—or how it shouldn’t be possible. But it is possible. I just have to do things differently,” Jordan said.

Dana Zumbo, business development manager for the Zappos Adaptive Team, said the show provides a welcome opportunity to shine a light on inclusion for everyone and said it is important to work with people with disabilities to open up the dialogue of what their needs are when it comes to fashionable and functional clothing.

“At the end of the day, it is our responsibility as a retailer to offer options to all people. People with disabilities want to dress and express themselves through whatever style they want, and there just haven’t been options,” Zumbo said.

The highlight of the event, in a night full of highlights, was when Ukrainian model Oksana Kononets took the runway. Scheier had mentioned that Runway of Dreams had been working for four years to bring Kononets to the U.S. for a show, and she was all set to attend before the Russian invasion of Ukraine. Kononets, along with her mother, traveled from Ukraine to Poland and arrived in Los Angeles two days prior to the fashion show, receiving a standing ovation as she made her way down the runway wearing a bold yellow top.

The adaptive fashion market is expected to reach over $400 billion by the end of 2027, with increasing demand for adaptive clothing from the fashion industry.

“We partnered with Tommy Hilfiger in 2016 and did a show with them, and now in 2022 we have almost ten brands all believing in this movement and the fact that adaptive fashion is not an initiative, it’s a business opportunity,” Scheier said.