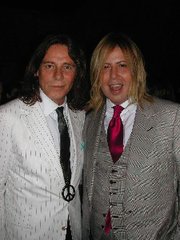 Vogue magazine documentary "The September Issue" opened this month, and on Sept. 9, a select Los Angeles fashion crowd went to a screening of "Coco Before Chanel," a bio-pic of the pioneering designer Coco Chanel. It was shown at the Pacific Design Center in West Hollywood, Calif.

The French-language film starred Audrey Tautou as the legendary designer, who ushered in the template of the spirit and the showmanship of the modern fashion industry. The flick follows the self-made Chanel inventing herself and her life-defining romance with English entrepreneur Arthur Capel. Sony Pictures Classics will release the film in Los Angeles on Sept. 25.

Before the screening, Tautou and film director Anne Fontaine spoke to the audience. Tautou paid homage to the film’s subject and displayed a little Gallic cheek. “It’s interesting to discover a bit of her mystery,” she told the audience in reference to Chanel. “Voila!”

After the screening, there was a party at the Chanel boutique at 125 N. Robertson Blvd., where fashion critic Steven Cojocaru showed up in a Tom Ford suit and stylist George Blodwell held court in a tailor-made Mario Pecora jacket. Perrier Jouet champagne was served. Inside party gift bags were Chanel perfume. Mon dieu!