Just when you thought that independent Abbot Kinney Boulevard was on its way to being dominated by chain boutiques, pioneering L.A.-based store H.Lorenzo came to the rescue.

H.Lorenzo gave new homes to Venice artisans in its new concept Left House. The store made its debut May 11 with a big party at its home on 1629 Abbot Kinney near the cross street of Venice Boulevard.

It was a welcome change for Nick Fouquet of Westbrook Maker and Tini Courtney of H.O.W.L. Fouquet had been making his beaver pelt hats in a basement workshop on Abbot Kinney. Like Fouquet, Courtney looked forward to her first store. “I’m not working by myself in a little room,” she said. “I’ll be inspired by everyone here.”

Kapital will be the lead brand in Left House’s first room, where other American-inspired Japanese brands will be offered too. M. Cohen’s friendship-bracelet inspired jewelry takes the second room. (Cohen also runs a store on West Third Street in Los Angeles.) The back two rooms will be devoted to Westbrook Maker and H.O.W.L.

Veteran L.A. couturier Henry Duarte was among the party crowd. “They can make an office, a workshop and their own store,” Duarte said of the arrangement. “It allows young designers to emerge. This is the future of retail.” 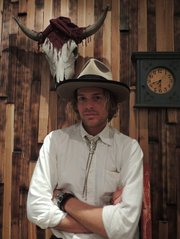 M.Cohen at Left House. One purpose of his jewelry was to open minds and change perspectives, he said.