A Spring '14 look by Ashton Michael

So a Hasid and a Cholo go into a fashion boutique…

Ashton Michael Designer Ashton Hirota showed 24 of his line’s Spring looks in a show called Black Cross on Oct. 15. With a flourish of guerilla theater, Hirota closed down the street in front of his studio at 1649 Las Palmas in Hollywood. The runway was the middle of the street. Along with fashion press, stylists and retailers the audience was whomever was passing by.

For his new collection, Hirota was inspired by the separate, enclosed worlds and the uniforms worn by the cholos, sometimes labeled as Chicano gangbangers and Hasids, a mystical and puritanical Jewish group. With inspiration from their disparate styles, Hirota added his urban goth taste for a unique line.

For the foundation of the line, he used materials like leather and silk. Some female models wore leather bandanas around their faces. “They almost looked like high fashion robbers,” he said.

Some of the male models wore leather leggings and leather kilts, and oversized shorts over the leggings which were reminiscent of the oversized pants Cholos wear. For the Hasidic influence, look no farther than the hem of the shirts. They looked similar to the fringes Hasidic men wear. Hirota said the striping and the paneling of the shirts wear influenced by the tallis, the Hasids’ prayer shawls. 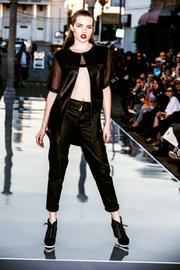